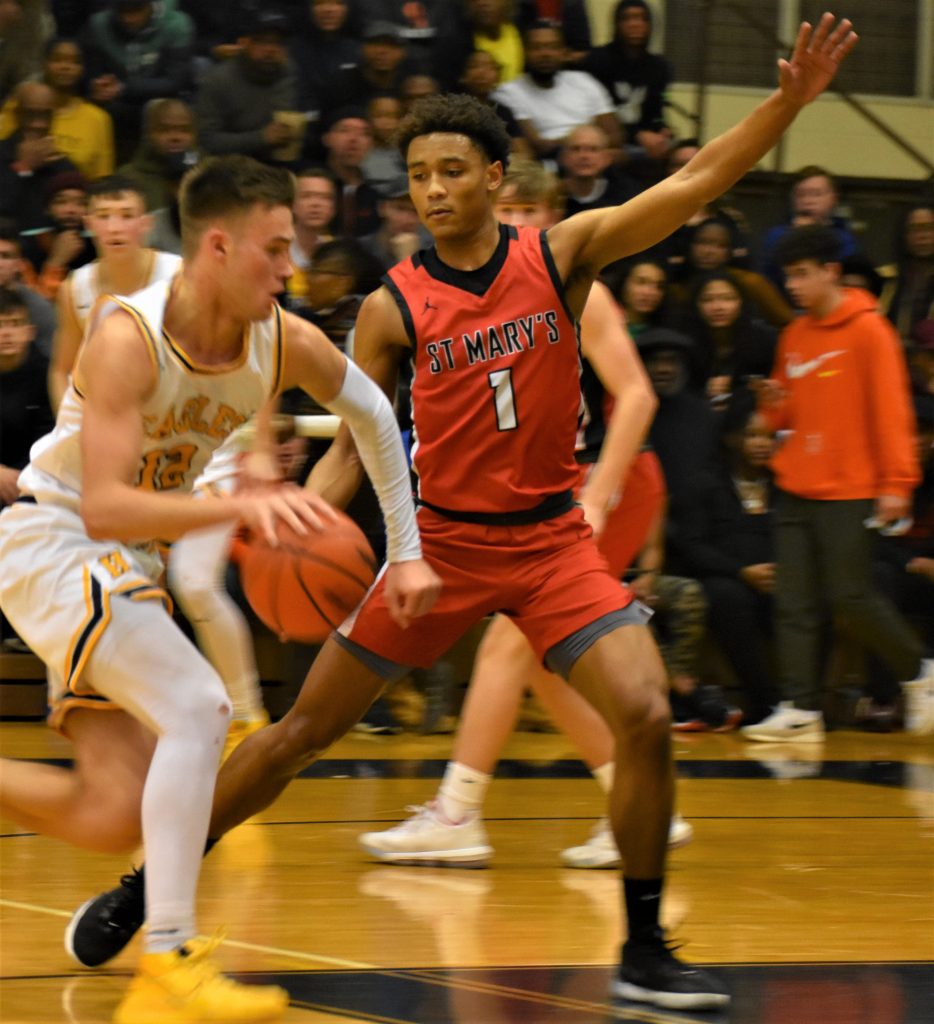 For the second time in as many recruiting cycles, Northwestern has landed a top five player in his class from the Mitten. The Wildcates received a pledged from 6-3 2021 guard Julian Roper, an all-stater from one of Michigan’s elite teams Orchard Lake St. Mary’s. He joins Clarkston 7-footer Matthew Nicholson, who will be in purple this fall. Here’s a look at the evolution of Roper as a prospect. He is Northwestern’s most highly-regarded hoops recruit from this better side of the Big Lake since Detroit U-D Jesuit point guard Julian Bonner took 94 to Evanston out of Michigan’s legendary class of 1995.

October, 2017: He and DCD sophomore Wendell Green are one of the top underclassman backcourts in Michigan. Considered an early top 10 2021 prospect based on his age group AAU career, and certainly did nothing at the Bank Hoops All-State Camp to hurt that rep here.

“The second-best freshman I saw (after Pierre Brooks),” a coach said. “Can shoot it and get to the basket. Caught a nice alley in transition during games. Would’ve liked to have seen him play against the older players sometimes it was too easy for him with his age group.”

“Julian is an extremely talented and athletic guard with great size,” said another coach. “He can do just about anything he wants offensively. Very gifted scorer on all three levels. Rebounds well on the offensive end for a guard and is an improved passer from times I’ve seen him in the past. Doesn’t always sell out on the defensive end like he’s capable. Would also like to see a player of his caliber be more vocal.”

June, 2018: He had different roles depending on the day at Oakland’s team camp. With Wendell Green there DCD will try to outscore you and Roper’s apt to put up a shot as soon as he touches it. Against Detroit Renaissance, for instance, that approach just ended up giving the more talented overall team too many possessions and Renaissance won by 30; against Clarkston it meant a rising freshman guard scored 35 points often in transition off of Country Day’s quick shot attempts. With Green absent Saturday Roper took on a leadership role and played versatile all-around basketball. When paired with a post it was layup city off the dish as he put so much pressure on the defense getting into the paint. Just as often Roper was the tallest player out there for the Yellowjackets and he’d fight inside defensively and on the glass, while being aggressive and strong while deceptive with hesitations moves to collect and-ones on the other end.

November, 2018: DCD will look much different, as point guard Wendell Green, now at LaLumiere, was so ball dominant. Roper is the alpha now — and at times was face-guarded, which isn’t something you’re prepared to see in a scrimmage. Physically mature, and outside of the football-first guys, he may have been the most physical player in the gym. Knocked down the 3 from the wings and was good attacking the hoop. Dribbles too upright and will have to show he can create separation when handling the ball.

January, 2019: Detroit Country Day sophomore Julian Roper must be mentioned as possibly the top 2021 prospect in Michigan. None so far have had a better game than his 36-point effort against Oak Park. Roper was aggressive, but cerebral. He got to his spots and rarely tried forcing things that weren’t there, creating a ton of shots without dribbling the air out of the ball. He has a bunch of moves attacking the rim to create space or draw fouls. He was explosive off two feet around the rim. Roper had multiple euro-type finishes in transition, scoring with either hand. He’s also comfortable pulling up on the jumpshot out to three-point range. While his scoring will get the headlines, his playmaking game is solid. Roper already has an Iowa offer, and it will be hard for most high-majors to pass up on him if he continues to play close to this level. He’ll be a major priority of Big Ten schools along with fellow 2021 combo guards and top five Michigan Kobe Bufkin of Grand Rapids Christian and Farmington’s Jaden Akins.

April, 2019: Projects with frame and skill to be a guy who’ll be able to get off his shot and score in the Big Ten. He can flat out get buckets. Versus Mac Irvin, Roper helped spark a comeback from down nearly 20 at half to tying the game late. Scored playing out of the pick and roll, knocked down shots off the catch and scored in transition. Finished with both hands around the rim. Was hitting 3s from all around the perimeter over the weekend. Also made quite a few creative, effective passes to get teammates opportunities. He is Indy Heat’s top perimeter player and arguably their best player period.

May, 2019: A transfer from Country Day who will give St. Mary’s upperclassmen guards going to the Big 10 in 2020 Wisconsin pledge Lorne Bowman, and one with Big 10 offers for 2021, Roper from Iowa and Wisconsin. That’s looking prescient, as Roper could be the next Duane Washington out of the Mitten. Great vision and delivery of the ball in transition. Big frame and loves to go body to body at the rim, where he finishes with either hand. Good defensive fundamentals on the ball, can get upright and caught hugging his man sometimes off the ball.

July, 2019: At the Brawl for the Ball the Indy Heat’s 15U was playing up in 16U, which wasn’t much of a deterrent to Roper given his broad upper body and strong legs. He’s a smart half-court offensive player who runs hard off screens and is unselfish, even waiting for bigs to re-post and feed them again, which you hardly ever see in AAU. When attacking from the top, doesn’t get too deep before deciding to pass. On defense he’s quick enough to check up top in man, and strong enough to play the back line in a zone. Sneaky length because of his build, but can see the wingspan when he’s closing out high hands. Continues to become a true combo guard, and with his frame could really be onto something there. JR’s a top five sophomore in Michigan who will continue to track high major with some more hip/core flexibility and another half-step in explosion off the dribble.

December, 2019: What a difference a year can make, going from the sinking ship at Country Day, to a state title contender at OLSM. And the pep in his step reflected the positive change. Not overly tall, but with a wide-shouldered frame can easily play the 2 in college. The nice thing here was how easily Roper’s 3 was falling. That complemented the ambidextrous playmaking and correct if basic decisions on the break; finished the break above the rim himself; checking one of the best guards in America, Akins; competing on the glass and off the ball; scoring 26 without jacking while keeping teammates involved.