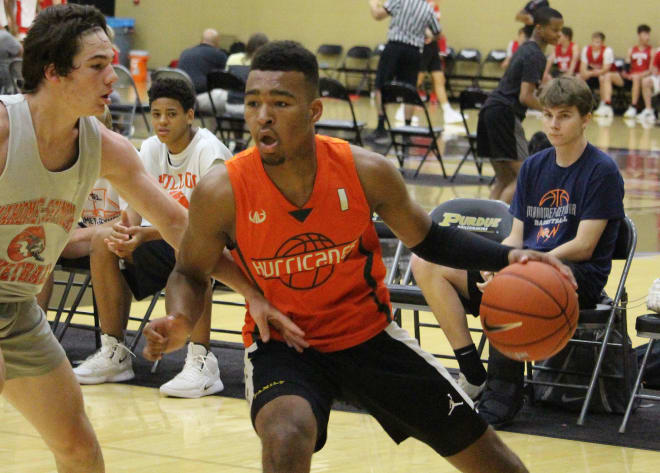 Michigan State got its 2021 recruiting class rolling by landing one of the state’s elite in that class, 6-6 Detroit Douglass junior Pierre Brooks, who also had a Michigan offer. He’s a versatile player that allows myriad types of talent to be brought in around him. Brooks averaged 23.2 points, 7 rebounds and 4.7 assists per game for Detroit PSL runner-up Douglass.

Here’s a snapshot of the past four years, as Brooks evolved into one of the nation’s elite prospects.

August 2016, Bank Hoops Underclassman Camp: Nice combination of size and skill as a 6-2 eighth-grader, as he could rebound it then bring it up and make a play with the ball. Advanced feel for the game, and able to see things happen over smaller guards defending him. Shot selection left something to be desired.

“Long, big guard who certainly has a couple inches of growth left in him,” a coach said. “Played like a seasoned guard against older competition. Certainly a gamer. Sneaky in the passing lanes, but one area of improvement would be his defense on the ball.”

August 2017, Bank Hoops Underclassman Camp: Brooks’ talent was already apparent previously at the Bank Hoops Underclassman Camp. He was even better this time around thanks to improved shot selection, opportunities turned into assists — on the break, from the wing or out of the post. He and Dunn had terrific chemistry, whether running screen-and-rolls, give-and-goes, or simply feeding each other in the post. Brooks, son of the Detroit Douglass coach of the same name, has the instincts and court vision of a guard in the body of a forward. Though not yet in high school, he’s already won on one of the biggest stages there is for middle school players, as a member of the Family which finished second in the 13U AAU national tournament. As he matures and gets more explosion and lift from that big build, he’ll be even more dangerous around the rim. Size, skill, personality, there are more than a few similarities at the same age between Pierre and Denzel Valentine.

October 2017, Bank Hoops All-State Camp: Has to actually, you know, do something in high school. But for his age, Brooks has maxed out his resume. A winner in AAU, consistent standout at camps and exposure events and workouts with Micah Lancaster, one of the top trainers in the world. Brooks is a coach’s son with a big body for his age, so fit right in going against the camp upperclassman. Shots that may have been questionable at last year’s camp, were good looks this time around as he’s become more consistent. Was competitive, vocal and a leader in drills if not as much in games. While he can hit from three-point range, is at his best pulling up or posting up at the elbows. Good vision on the break, and the strength to deliver the ball. Able to bull his way into the lane, but would behoove Brooks to work the angles and glass instead of going over the top which is a much tougher shot — at least until he’s older and gets the bounce to make those dunks and not finger rolls. Once he learns the intensity needed daily at the varsity level, could claim status at the top freshman in the Mitten.

April 2018, Nike EYBL Indianapolis: This young Family team has a number of potential D1 guys on the perimeter. While not the best athlete of the bunch, Brooks typically brings the most to the table. If you’re gonna try and zone those athletes Brooks will make you pay because he made quick passes to the open man and moved well off the ball put himself into open pockets of space. Just knows the game and makes plays wherever you put him. He hit several 3s in the opener against C2K. Needs to continue getting consistent from there. His outlet passes hit teammates wherever they were. Tough mid-range game with one of Michigan’s most dangerous pull-ups. He has consistent mechanics and it’s a high percentage shot for him. Just needs to gain that consistency from deeper .

June 2018, Izzo Shootout: The coach’s son did it all for Frederick Douglass — steals, rebounds, blocked shots, playmaking, advancing the ball. He’s physical for a rising soph. Crashes offensive glass hard. Rebounds pretty well for his size.  Used head and shot fakes under the hoop. Absorbs contact. Showed improved athleticism. Brooks is squarely on the host school’s radar, and did nothing that would incline them to turn off the signal.

April 2019, Grand Rapids Storm Classic: His high usage as a varsity underclassman has helped him sharpen his scoring game. Hard to deal with when he was coming downhill off of handoffs or curls, then used his big frame and either hand to finish around the rim. Knocked down shots coming off of screens. Brooks hit some big boy shots in crunch time. Good vision and delivery as a transition passer. He had no problem playing up in the 17U division getting physical on the glass.

May 2019, Spiece Run-n-Slam: He’s the most steady, consistent player currently in the class. Almost a guarantee to put up points and rebounds every game. Finishes so well around the rim. He absorbs contact with ease and is a great finisher even when putting the ball up at awkward angles to avoid getting blocked. Great touch around the rim. Posted up bigger and smaller players thanks to his thick frame. Could go through players or score over either shoulder or facing up from mid range. Also knocked down multiple 3s over the weekend. He slingshots the ball to the rim and will need to adjust that before getting to college. When he’s in rhythm it’s not as bad and it usually goes in. Rebounded very well and he has to since The Family 16s are undersized.

October 2019, Detroit Douglass open gym: The coach’s son is the team’s focal point. He’s Douglass’ best passer at 6-6, making him the de facto point guard. He’s also their heaviest, strongest player, and most effective post player. Where the talent was really on display was when Brooks got a bit of steam coming downhill, able to handle the ball and get past smaller defenders then showing more speed and explosion getting to the hole and finishing than he had as a younger player. No one wanted to get in Brooks’ way when he decided to go all the way. If he can move from streaky to consistent wing shooter, goes from top 100 national prospect to top 50. Brooks has offers from Big Ten schools MSU, Northwestern, Iowa and Illinois, as well as Alabama, Missouri, Xavier and Kansas State.