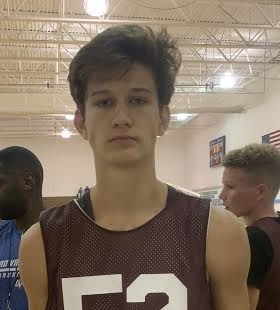 Michigan teams will again flock to Ft. Wayne today, Saturday, for the Great 8, with a 17U, 16U and 15U field. Included in said field are some of the state’s best college prospects, including 10 who are currently ranked among the top 10 in their class per Bank Hoops.

A’monte Allen  6-0  So  Prospectors 15U (Grand Blanc): A serious defender who helped the Prospectors emerge as one of the state’s best 15U teams in the summer. Aggressive on the ball defensively, or pushing the ball offensively. Has the positive, team-first energy you want at the point guard position. A much improved shooter.

Kaden Brown  5-11  So  REACH 15U (Grand Rapids Catholic Central): Had a huge debut for REACH last weekend, their leading scorer in winning a tournament in Indianapolis. One of the state’s elite underclassman shooters, with a knack for getting open. Talented and athletic enough to swing between either guard spot.

Kobe Bufkin  6-4  Sr  Grand Rapids Storm 17U (Grand Rapids Christian): The state’s No. 1 ranked 2021 prospect, who will sign with Michigan. Pro potential with his separation and elevation with the ball. Doesn’t have to get 30 to be happy and will play both ends of the court.

Nathan Claerbaut  6-10  Sr  West Michigan Lakers 17U (Zeeland East): Tall, mobile with good hands, it’s easy to see how Clauerbaut has offers from Boston U and Denver as those are the kinds of skills that can prosper at a lower D1 level as the strength in core, butt and shoulders come come along and help him bang as well at the next level.

Christian Humphrey-Rembert  6-7  Fr  Grand Rapids Storm 14U (East Kentwood): Some guys just have the look, and this is one of them. So long and agile for his age, he’ll be in the discussion for the best freshman in Michigan. This Storm team is playing up in the 15U division.

Jack Karasinski  6-7  Jr  MBA 16U (Grand Rapids Catholic Central): Such easy bounce, it’s imperative to keep Karasinski off the rim or he’ll get some momentum-changing dunks. Smooth but explosive wing slasher with mid-major offers and high-major interest that could evolve to offers as the jumper comes along.

Trey Lewis  6-5  Jr  REACH 16U (Ferndale): Classic college wing jumpshooter with his size, release and work off the ball to get open. Lewis has offers from Toledo, VCU, Kent State and Siena, and don’t be surprised if he ends up at the Big Ten level eventually as his true guard skills grow.

RJ Taylor  5-11  So  Minor Threat 16U (Grand Blanc): A game’s energy changes when Taylor touches the ball, because he’s so fast, keeps everyone engaged and can score off the bounce or jumper. A much improved defender. Has an offer from Rhode Island.

Jahkary Towns  6-0  So  Grand Rapoids Storm 15U (Godwin Heights): Looks like he’s modeled his game on Trae Young, and the results were Towns was one of the state’s leading freshman scorers last winter. Strength, maturity and shot selection have helped him go from phenom to legit hooper.

Kyler Vanderjaget  6-4  Jr  Grand Rapids Storm 16U (Grand Rapids Northview): He’ll be making his debut with the Storm this weekend. Big, versatile and sneakily athletic guard who has looked right at home playing alongside some of the very best going, like Ty Rodgers earlier in the summer with Minor Threat, or a recent Family showcase open gym.