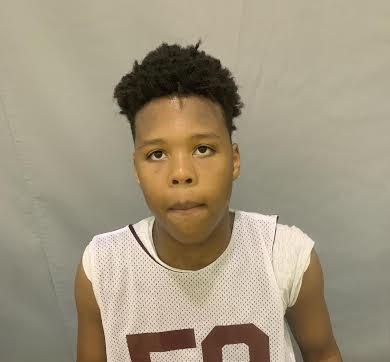 Muskegon 2022 forward will be a breakout player this winter, based on his AAU play with UTS Elite.

Michigan’s 2022 class continues to add value with emerging size and improvement from already established frontcourt prospects. The Great 8 Showdon in the Summit City featured future scholarship forwards and centers throughout the 16U field, including a number of 6-9 types.

Carson Cooper  6-9  Jr  Michigan Lightning (Jackson Northwest): He took a backseat to no one in the field, as the Lightning dispatched of “bigger name” programs REACH and MBA before falling in the 16U championship game to a UTS Elite squad that was really clicking. So was the Lightning for most of the day, with Cooper triggering an entertaining fastbreak attack built around the athletic, dynamic guard play of 6-4 Ethan Crabtree. This is the perfect big man for this style because he runs the court easily. Cooper produced against the tallest center in the 16U bracket, REACH’s Sam Leppien; a shorter but explosive shoot-drive forward in REACH’s Calvin Marshll; a tough big-faceup combo from MBA in Ethan Dunn and Owen Varnado; then two smaller versatile forwards in the final, UTS’s Ethan Hill and Owen Hardy. He rarely left the court, between his gift for challenging and blocking shots without fouling and having good fitness in a time when not everyone does. He was still going to work above the rim well into the third game of the day. Really embraced playing a traditional post game against a guy, Dunn, who has made his bones being just that, and Cooper thrives with his length, bounce and energy. While Marshall caught him off the drive a couple times, the Lightning big man was also able to get out and use his length to force the DEPSA forward into tough shots. Caught the ball high for easy finishes off the pick-and-roll; uses quickness in post iso — which puts him on the line along with getting fouled when he crashes the offensive glass.

Ethan Dunn  6-9  Jr  MBA (East Lansing): He was terrific against the Grand Rapids Storm, flashing to the post again and again to exploit his size and strength mismatch of their forwards. He set that up with some smooth, efficient pick-and-roll finishes. He sets a lot of ball screens in high school, so was most comfortable and dangerous doing that. Big frame and blocks out the sun whether setting or defending screens. Would like to see Dunn really lay the wood on some picks. The more structure the better for him, so AAU success largely depends on matchup and style. Steady effort, steady pace, he’s well-coached — consistent and won’t hurt you if left out there for long stretches, two seemingly basic traits too rare with young big men. Does the basic stuff that helps the defense as a whole — finding his man when a shot goes up, tagging and recovering when hedging ball screens. Good passer from the post. Didn’t look bad checking a true wing, Ty Ryske, against the Storm.

Owen Hardy  6-7  Jr  UTS Elite (Forest Hills Eastern): UTS was going without a power forward who looked like a top 25 prospect for them in July, Benton Harbor 2022 Delricco Gillespie. Hardy is a different look, a finesse runner and smooth finisher, who was very good in his own way. Hardy was money in the 16U final, making 5-of-6 shots. His speed really made opposing big men work hard, a matchup that played to the advantage of UTS which likes to throw a bunch of guards at you and go up and down. Hardy was able to rebound and go for end-to-end scores himself. Needs more definitive half-court offense and a go-to move. Athleticism also comes to the fore when he’s in a run-and-jump defense, quick to the ball for tips and steals.

Ethan Hill  6-7  Jr  UTS Elite (Muskegon): Big upside here, as this son of a former D1 player comes from one of Michigan’s top high school programs and has grown three or four inches in the last year. Earns his stripes defensively. Good shot-blocker who can also get out on the floor and check. Quick enough to take chances on the perimeter and then recover to the rim. In the 16U final Hill had defensive series where he had successive blocks on the same player, and another where he rejected the shot and caught the ball himself. Good hands on the glass. Offensively, more quick and smooth than explosive as a finisher. Comfortable with the ball from different spots, smooth and smart in the half-court he knows how to get open — but needs to cut with more urgency. UTS is guard-heavy so he creates his own luck on the offensive glass. Hill would score more if he sprinted rim-to-rim instead of coasting short at the arc.

Peyton LaCombe  6-8  Jr  Grand Rapids Storm (Ludington): Great high school defender with his size, smarts and weak-side shot-blocking. A good AAU defender, up until when facing D1 guys who expose LaCombe’s tweener status for the next level, like the Storm’s Ethan Dunn horsing him on the blocks or MBA’s Jack Karasinski slashing from the wings. High IQ and understands space on offense, angles on defense. Good shooter from the corners. He’ll get those sets run for him at Ludington. Less so on an AAU squad full of other shooters, so would be well served to get dirty, active and nasty away from the ball instead of sliding around the horn on offense.

Cole Jenema  6-8  Jr  Grand Rapids Storm (Cadillac): He had a very promising and productive sophomore season, but has found in AAU that he can’t get away with things as softly and easily as in the Big North. Smooth face up scorer with moves once he gets into the lane. When he’s playing the 5 can get help-side blocks but overall seemed to invite drives.

Sam Leppien  6-10  Jr  REACH (Alma): He’s embraced the grind working on his own, then loves to play once the ball goes up. Runs the court hard both ways and it doesn’t take long for him to arrive at the rim with those long legs. Embraces his height defensively, shutting down the lane and keeping his hands high and active. A more dangerous post scorer now that it’s predicated on a jumphook in the lane. Had flashes against one of this tournament’s stars, the Lightning’s Carson Cooper, including one of said jumphooks and a defensive series that forced a turnover. Keeps the ball high on put-backs. Doesn’t try to play outside himself or be something he’s not, just making Leppien that much more valuable and efficient. Sometimes gets caught watching on the boards and while has a quick first defensive rotation, the second one needs to be just as sharp.

Jalen Overway  6-9  Jr  Minor Threat (Holland Christian): A post presence who demands a double team. If he gets the ball otherwise in a one-on-one situation, patiently uses his huge frame to push you under the basket for the easy deuce. Sometimes can wait too long with the ball instead of going for the quick kill. Soft hands and makes a target. Confident shooter with touch from the short corners and also wasn’t hesitant to take, and make, a 3 from the top of the key against UTS Elite. His screens helped lead to a bunch of buckets from Minor Theat’s star point guard RJ Taylor. Looked comfortable running end to end. Didn’t match up with any other real centers, which was his forte during the high school season when we saw Overway against Zeeland East’s Nathan Claerbaut, using his leverage advantage to push the 6-11 Zeeland East 2021 prospect outside his comfort zones. Claerbaut has mid-major offers and his O-K Green rival could follow suit as Overway adds more explosion around the rim; consistent high hands defensively and on the glass; lower butt and nimbler feet when guarding in space.

Ian Weller  6-7  Jr  Michigan Lightning (Jackson Northwest): A nice complement to Carson Cooper, his high school teammate at Jackson Northwest so they’re used to each other and don’t get in the way crowding the lane, or trying to set screens at the same time which you see happen with kids running around in AAU. That chemistry allowed the Lightning to play the two bigs together, a luxury other clubs don’t always have either because of personnel or the spacing issues mentioned above. While Cooper is the taller, longer, more natural athlete, Weller works belong the rim with leverage, positioning, toughness.