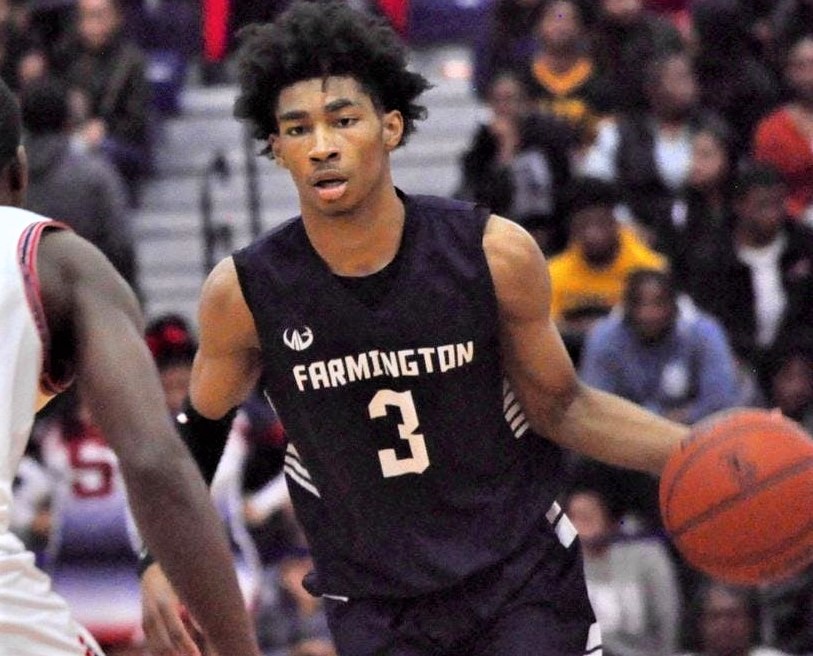 The commitment of Jaden Akins to Michigan State gives the Spartans two of the state’s top three 2021 recruits.

While he wasn’t one of the anointed ones in Michigan beginning his high school career, Jaden Akins found out what happens when natural talent meets work ethic, and now going into his senior season is one of the top prospects in America. The three-year Farmington star, now at Ypsilanti Prep, committed Thursday to Michigan State. Here’s a look at the development of the future Spartans guard, dating back to his freshman season.

December 2017, Battle of the Midway: While Farmington lost by a bucket to Parkway Christian, it wouldn’t have been that close without the efforts of Akins. Ninth-grade status be damned, he took his game up a notch in the fourth quarter and finished with 21 points, four assists and four steals. Akins is a smooth left-hander who made good decisions on the break, knocked down clutch three-pointers, had focus and hang-time to finish through contact and had stretches of strong defense. With maturation could be recruited at a very high level by the time all is said and done.

June 2018, Izzo Shootout: The Falcons didn’t have the manpower to stay with Williamston for the distance but early on Akins was a one-man gang, Williamston had no one to match up with his size and skill on the wing. Left-hander who covers space easily with the ball, can extend to finish, has a smooth mid-range game and makes good decisions and deliveries on the break. Good shift in his game. Some nice combo move pullups. Smooth shot. Was comfortable hitting mid-range pullup. Jump shot looks good off catch or dribble. Handles look legit in iso and has the perimeter skills to play as a 1 or 2 in a high school offense. Later on kind of fell into what Williamston’s zone wanted him to do, making 1-of-3 3s but putting little pressure on the defense. Trending as a Big Ten recruit in the 2021 class.

November 2018, Preasason scrimmage: Talented left-hander who played to the level of the competition. Looked confident with good reason knocking in shots from the top of the key, but not as easily from a couple feet beyond. Plays both guard spots and used height/vision to make things simple with kick-ahead transition assists. Smart and good instincts defensively so good when jumping and gambling, though sometimes got caught playing upright.

January 2019, OAA-White game vs Rochester Adams:  It was an atypical effort for him, as he was better on the defensive than offensive end. After Adams point guard Ethan Emerzian went off in their first game, Akins took it personally checking the fellow sophomore this time. While he didn’t turn him over, he used his superior size to blanket Emerzian and work for any kind of open looks, holding him to just one first-half field goal. On the other end Akins was the least efficient of Farmington’s guard triumvirate — and still scored 20 on 8-of-16 field goals which shows just how good the other two were. His Des Farmeresque flip-shot three-pointer missed on three tries. Looked good when scoring in the lane on a curl, where he loves a patented left-handed pullup.

April 2019, EYBL in Indianapolis:  Solidified himself as a future Big Ten/Big East type recruit, and sooner rather than later. True combo guard with length. He knocked down a lot of 3s over the course of the weekend, including one game of six. Was hitting from corners off the catch or scoring from the wing dribbling out of pick and rolls. Very quick with the ball. Frequently blew by his man, got into the paint and scored with floaters or at the rim.

January 2020, junior guard rankings: He has Farmington undefeated and in first place in what is as strong OAA-White. Like Bufkin, can make it look easy. Lefty who keeps a nice shot-pass balance, with some juice to go out and manufacture points when needed.

February 2020, Red Hawks Showcase: Bufkin scored 15 points on 5-of-11 field goals, including 2-of-5 three-pointers, and 3-of-7 from the line. Akins scored 24 points on 7-of-19 shooting, including 4-of-11 from behind the arc and 6-for-6 at the line. Grand Rapids Christian has won without Bufkin as its leading scorer, and did so again here. Farmington has little chance without Akins pacing them which results in some highly difficult shots … he made three three-pointers heavily contested by Bufkin. That Bufkin knows Akins’ game so well, is his physical/athletic peer, was dialed in and taking it personal — and still Jaden was able to get off shots, that’s talent. Even with the scoring burden nevertheless Akins is an able and willing passer with good vision from up top and a rare post-feeder.