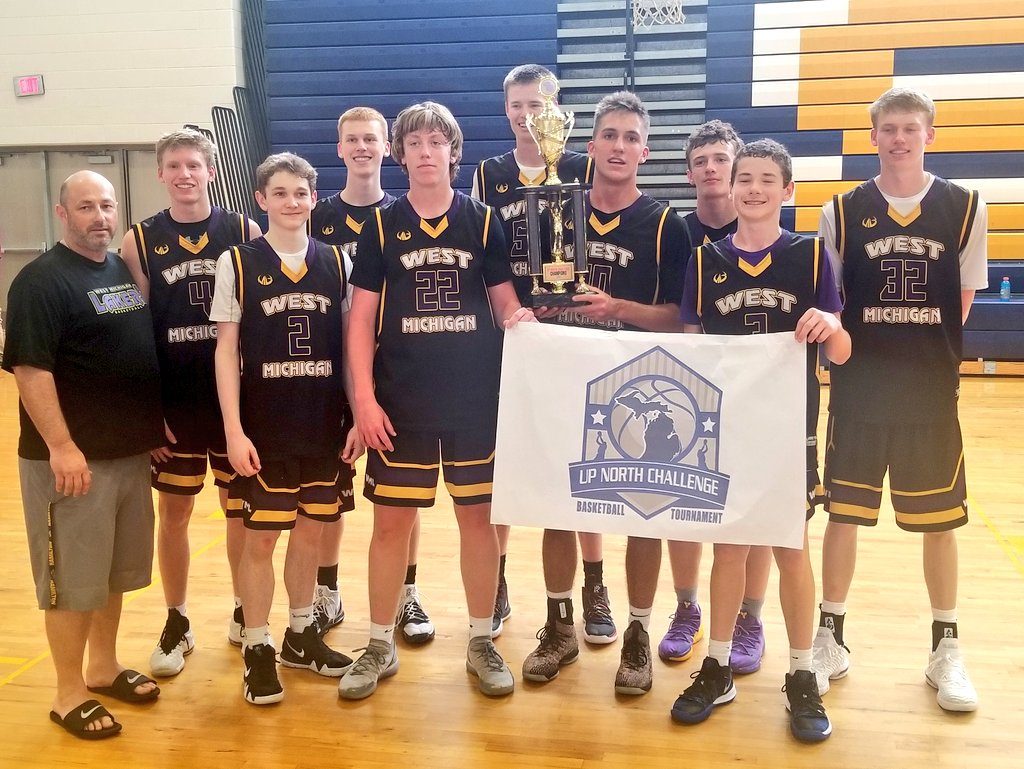 The West Michigan Lakers won the 16U championship of the 10th-annual Up North Challenge.

This wasn’t the end of the spring season the West Michigan Lakers 16U team envisioned. Their previous tournament ended with a last-second loss to Chicago Old Gold in the Camp Darryl Classic. Then they began the Up North Challenge 0-3 in a rugged ‘super pool’ with losses to Impact Elite, Oakland Elite and the North Oakland Wolfpack. But instead of packing it in, the 10th-graders in black and purple rallied Sunday to win out, avenging losses to Impact Elite in the semifinals then Oakland Elite in the 16U championship game. Carson Gulker, a 6-3 sophomore from Zeeland West, put back a missed driving layup by 6-1 Hamilton soph Tyler Stezowski for the game-winner under the FastModel Finish rules.

That those two would be involved in the winning play was no surprise, as Gulker is so good off the ball he knows where to be and when to be there, on both sides of the court. But that’s just half the battle, Gulker completes the deal with his strength and athleticism, allowing him to actually make something happen once he’s in the right position. Finishes up high both at the rim with dunks and mid-range with jumpers. Similar at the same stage to Blake Charboneau, the Gaylord all-stater soon freshman at Grand Valley State.

Stezowski was able to turn the corner at will, and himself is bigger and stronger than the typical underclassman point guard. Shifty with the dribble and can make it happen when he gets his shoulder into a defender, operating like the starting varsity running back he was last fall (while Gulker was the first-ever passing QB for Zeeland West). Loves to get to the rim, but will also pitch for 3s off of penetration.

The Lakers’ strength is their depth, as they don’t have to have a certain guy to hit 25 to have a chance. And they’re good up the middle, with understated but solid guard play around Stezowski and what’s nearly a unicorn in Michigan’s 2021 class — a 6-8 kid who can play. That would be Nathan Claerbaut, a Zeeland East sophomore. He gave up a lot of beef to Oakland Elite’s via Romeo 6-8 Blake Woodward in the final, but worked angles to free up his superior wingspan and get off shots. That came after a tough matchup in the semis with active and athletic 6-7 South Christian soph Connor Dykema from Impact Elite. Claerbaut seems to add something to his game and get more confident by the week. This time was his putting the ball on the floor, and even with some moves once he did. Unlike many young bigs he already has some good habits, finding a man when shots goes up and keeping the ball high.

5-10 sophomore Sam Versteeg is off the point guard assembly line coach Eric Taylor has rolling at Grand Rapids Christian. He’s clever with the ball and can step up and hit shots himself when needed. 5-10 Coloma sophomore Drew Goodline can really shoot it, and hit the FastModel Finish game-winning 3 against Impact Elite in the semifinals.

West Michigan Lakers Black advance to the U16 Championship Game! Another great game at the Up North Challenge!#FastModelFinish #UpNorthChallenge pic.twitter.com/hxtIp9aLeF

6-1 Birmingham Brother Rice sophomore Mikkos Stewart had a strong tournament for Oakland Elite. He was aggressive and competed on both ends of the floor. Could bully his way to the rim or score from mid-range. Able to create for himself or others in the lane.

He called, "Game!"
(Volume on)
Oakland Elite advance to the U16 Championship Game at the Up North Challenge!#FastModelFinish #UpNorthChallenge pic.twitter.com/lqAFz8eyP2

Stewart is joined in the OE backcourt by 6-0 Linden sophomore Blake Lund who is rounding into shape after missing the early spring season injured, and at times reminded why he’s one of the most feared shooters in the 2021 class with his high-arcing moneymaker while not just a driveway jumpshooter he’s gritty, vocal and active; and 5-8 Keyshawn Devlin, one of the quickest sophomores in the state who will be a dangerous upperclassman as his game adds other speeds. Up front, 6-5 West Bloomfield soph Kip Blazevicius has gotten tougher inside while also stepping out to look like a wing when he shoots it, with really nice rotation.