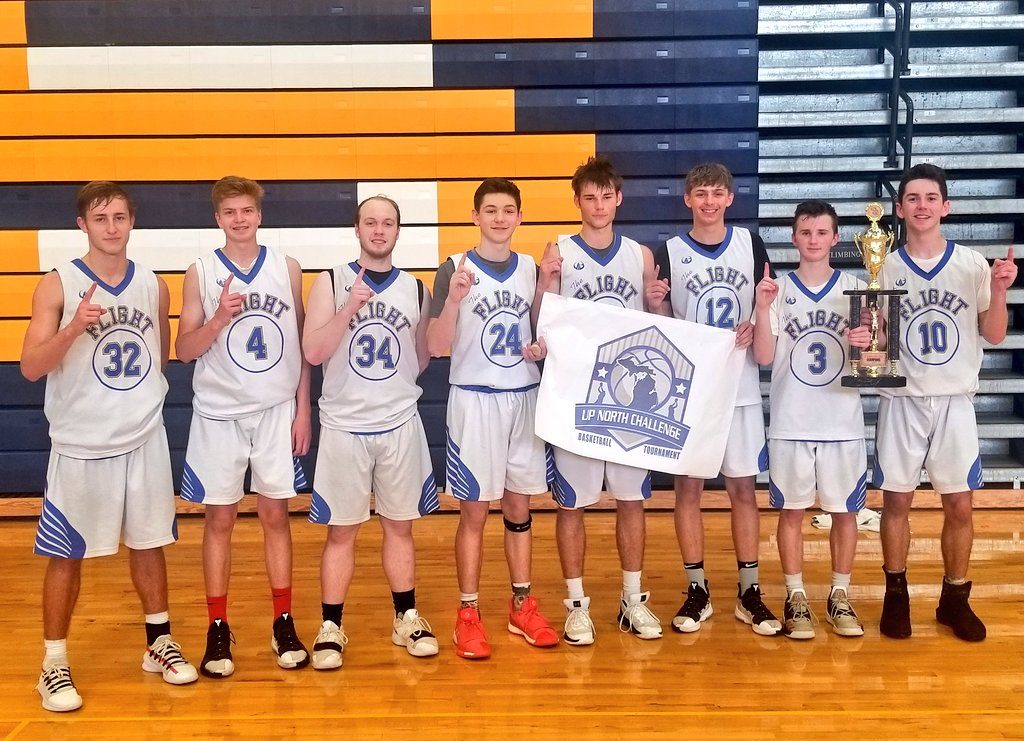 17U champions of the 10th-annual Up North Challenge, HHBC Flight, after defeating Camp Darryl in a tough championship game.

We already knew Hanover-Horton wasn’t your average Division 3 team, as three months ago it went into Ypsilanti Lincoln and beat what would be the Division 1 state champion. Now in travel ball form as HHBC Flight, they won the Up North Challenge, defeating Camp Darryl — playing in a 17U final for the fourth-straight Sunday – on a game-winning shot from 6-5 junior Luc Laketa.

CDBA had a chance to win it under the FastModel Finish, but its last possession was interrupted by a steal from Flight junior point guard Mitch Sauber. Then on their ensuing possession it was Sauber at 5-10 setting a screen on one of Camp Darryl’s biggest, most athletic players — 6-4 Cassopolis sophomore Brayden Saxton — to clear Laketa for the jumper. That was fitting, as Sauber made big plays throughout the tournament. He kept defenders off balance as he could hit the 3 as well as get the ball to the right spots and teammates involved with the pass. Quick hands on D. Sauber steps up to the moment, in addition to his clutch plays in the final, he had a four-point play in the semifinals. He has the moxie and leadership you want at the position, with strength and a pull-up/runner/floater waiting to make it at the next level.

Luc Laketa impressed people all weekend, combining nice physical tools with the energy and confidence of an accomplished older player. His father, HHBC Flight coach Parker Laketa, was once on staff at WMU, and Luc plays similarly to a former Bronco at the same age, Derek Fracalossi, as a strong, slashing, mismatch 6-5 wing forward. Runs hard and will mix it up inside. Surprised defenders with skill and body control attacking the basket, able to spin in tight spaces. Mix of fundamental foundation with some streetball flair. Has a nice rapport with twin brother Rhett Laketa, natch, and was able to find him for drop-off buckets from dribble penetration, and also found cutters with the pass when playing at the top of the key; Flight often ran its half-court offense through him. Luc’s handle was the biggest improvement we saw from the Bank Hoops All-State Camp last fall, til now. He’ll hit shots, but coaches will want to see more consistency. 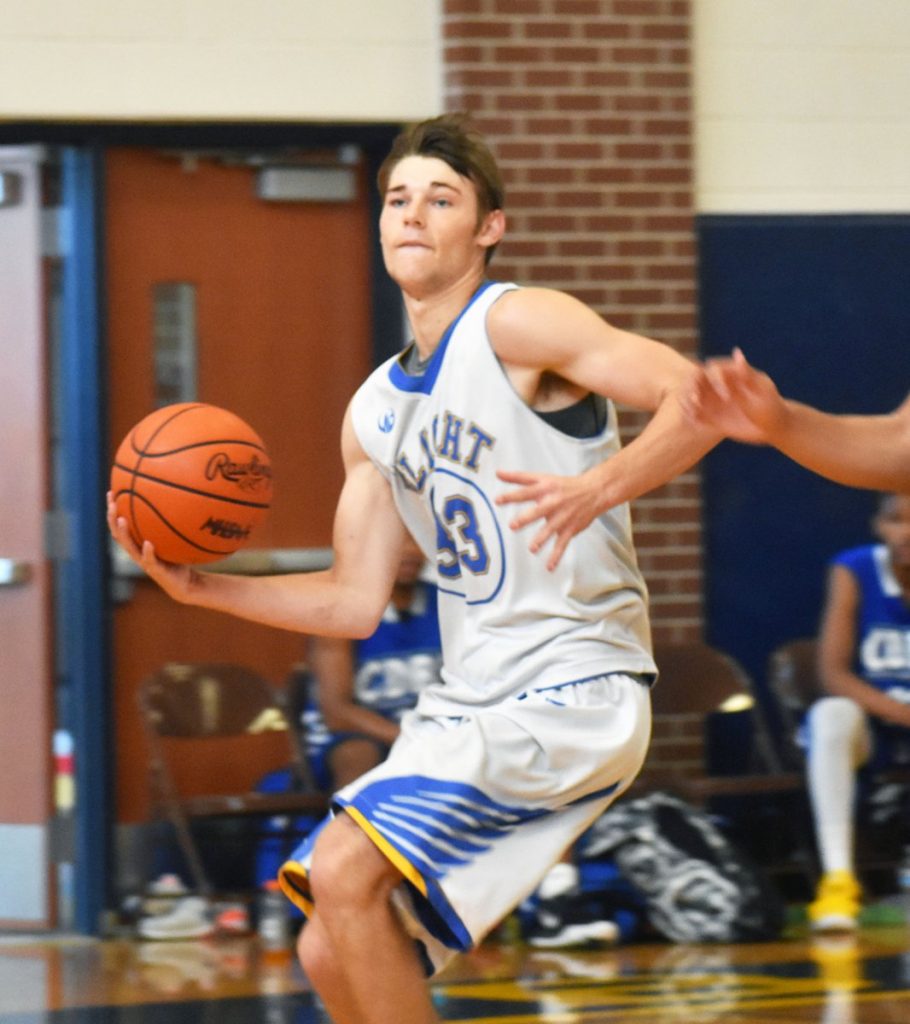 One of the state’s top 2020 forward prospects, HHBC Flight’s Luc Laketa, in the Up North Challenge 17U championship game.

Rhett Laketa is a 6-4 JYD who has a knack for being around the ball, at various spots on the court. He can be almost a one-man, momentum changing run when he’s getting steals, winning 50/50 balls and taking it to the rack and score. True team player who does the dirty work then can surprise a defense because it’s not that he can’t score, it’s that he’s paying it forward, and then will balance it out with some shots of his own. 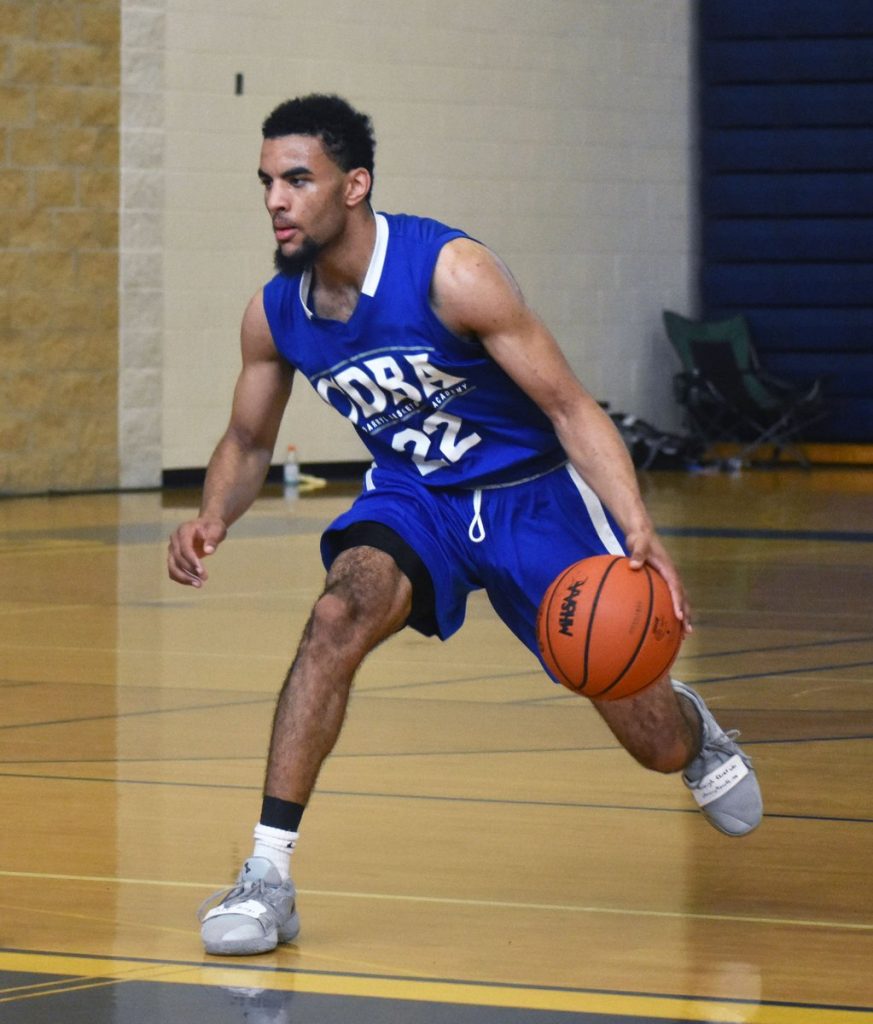 One of the top 2020 guard prospects in Michigan, Camp Darry’s Trevon Gunter, in the Up North Challenge 17U championship game.

HHBC Flight his a Camp Darryl team that has meshed and is clicking after playing deep into Sundays throughout the month of May. 6-1 Kalamazoo Central junior Trevon Gunter was CDBA’s leading scorer in the final. He has the perfect mentality to compete in title games — confident doesn’t get too high or low. A great-looking, textbook shot, it’s easy to see how he was one of the state’s top three-point shooters in the winter per BCAM. As a point guard, more like a Derek Fisher than Stephon Marbury — steady as she goes, not a lot of wiggle and creativity. Great build and will prosper all the more with a college weight program. High end grades/test score make Gunter that much more attractive a recruit.

Saxton is CDBA’s top long-term prospect, playing up as only a 15-year-old sophomore. A serious athlete who is one of the more devastating two-footed leapers in Michigan. Saxton’s so talented that you know it’s coming, but still one of Camp Darryl’s favorite set plays is sending him up to get an alleyoop. More of a forward than a guard, and can play like that at some college level, further skill development is a bonus, albeit a welcomed one.

While quiet in the final, 5-11 Flint Powers junior Noah Baylis had a strong tournament for CDBA. While known as a shooter, he was not just getting to the rim repeatedly, but finishing through contact, drawing fouls, making and-ones. Good teammate who stays involved and plays hard even when he’s not putting up a lot of shots.

Another Flint-area guard for CDBA, 6-0 Flushing junior Landen Moore, has but on some good weight since he was turning heads at the Bank Hoops All-State Camp. Much matured as a point guard. Has added more substance and less flash to his game. Solid decision-maker wo will get after it on D.