Brawl for the Ball: 15U recruiting guide 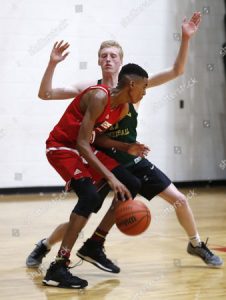 Emoni Bates is the most highly regarded incoming freshman in Michigan since Chris Webber over 30 years ago.

The most talented division at the Brawl for the Ball may be 15U, where you have among others the the No. 1 2022 prospect in the whole of America. And here’s ample young talent beyond that for D1s that want to get a head start.

Ty Barnes  5-9  So  UTS Elite (Grandville): Plays a Detroit-style game in the O-K Red. Fast point guard who can shoot it. Helps set the tone with his toughness and mindset for one of the best 15U teams in  Michigan. He recently received an offer from Bethune-Cookman.

Emoni Bates  6-8  Fr  Bates Fundamentals 14U (Ypsilanti Lincoln): Bates Fundamentals is playing up in the 15U division, which you can do with a kid like this who is trending as one of the best young players in state history. If you said he was a 16U high-major prospect and not someone who has yet to play a high school game, it would be easy to believe with his size, mobility and skill level.

Kobe Bufkin  6-3  So  UTS Elite (Grand Rapids Christian): Left-handed guard who four or five times a game will pull off a high-major move that’s simply too much for high school kids to handle. Could name the offer when toughness, strength, defense, consistency coincide with the talent.

Jamari Buddin  6-3  So  Dynamite 15U (Belleville): Can rebound and finish on the baseline at the 15U but also shows a handle, in the open court at least, that speaks to a backcourt future.

Nathan Claerbaut  6-7  So  West Michigan Lakers 15U (Zeeland East): Not strong enough to be a consistent low-post scorer, but has a soft touch and makes his greatest impact as a shot-blocker.

Parker Day  6-5  So  GreenWood Elite 15U (Saginaw Heritage): Nice combination of size and skills on the wing. Can score from myriad spots on the floor. Improving in his physicality and toughness.

Connor Dykema  6-6  So  Impact Elite 15U (Grand Rapids South Christian): Has a frame to rebound like a center at the 15U level, and a strong athlete who will be a contributor next season for what will be a top 5 Class B team.

Trey Gardette  5-9  So  Dynamite 15U (Ann Arbor Huron): Serious on-ball defender who can score at his size with a left-handed runner.

Julian Gardner  5-6  So  Big Ten Hoopstars (Flint Beecher): What is it with Beecher and little guards? This kid is explosive and fearless. Could project higher as a football recruit.

Carson Gulpker  6-2  So  West Michigan Lakers 15U (Zeeland West): Power wing who can get into the lane and score over smaller guards. Clutch shooter for the Lakers in the spring.

Basheer Jihad  6-6  So  GreenWood Elite 15U (North Farmington): A role player but intriguing with his passing and court awareness on the blocks or from the elbows.

Julian Lewis  6-4  So  REACH 15U (Ann Arbor Huron): Separates himself at this age with his ego-less all-around game and energy, and has played himself into top 10 status in 2021.

Blake Lund  5-11  So  Oakland Elite 15U (Linden): Provides heart and guts for one of the top two 15U teams in Michigan. Tough inside and off the ball, and can really shoot it with range.

Jayden Nunn  6-1  So  Oakland Elite 15U (Flint Carman-Ainsworth): One of just five sophomores in Michigan with a D1 offer, and the largest school of that group from Duquesne. A tough cover between his quickness and arsenal off the dribble.

Brody Parker  5-11  So  REACH 15U (Troy): He can shoot it with range, and has skills and vision off the bounce. One of the best guards in this class when he’s rolling with the right balance between them.

KJ Rai  6-5  So  MBA-Powell (Okemos): A transfer from East Lansing, he has a nice combination of size and shot.

Tripp Riemersma  6-2  So  Grand Rapids Storm 15U (Zeeland East): The Storm has a number of solid guards. Riemersma distinguishes himself with size on the wing, which he comes by honestly as his dad Jay Riemersma was an NFL tight end and an all-state hooper himself back when there was just one Zeeland HS.

Kareem Rozier  5-8  Fr  Bates Fundamentals 15U (Orchard Lake St. Mary’s): The man getting the ball to Bates’ young studs up front, and able to create shots for himself. He and Lorne Bowman will give OLSM something like the kind of backcorut talent the Eaglets had at the turn of the century.

Trevor Smith  6-0  So  Oakland Elite 15U (Rochester Stoney Creek): “Coaches’ player” who was a freshman starter in a high-end Class A league for Stoney Creek. Doesn’t “flash” like some of his OE teammates, but is solid and consistent on both ends.

Brendan Sullivan  6-3  So  Oakland Elite 15U (Davison): A clone of Peter Firlik, who was the starting 2G on Ferris State’s national championship team, with how he can separate and elevate for the jumper.

RJ Taylor  5-9  8th  Parallel 45 15U (Midland Dow): Elite 2023 point guard who recently turned heads playing up in age at CMU’s camp. College coach’s son who can match speed-on-speed with older guards and has a knack for finishing.

Simon Wheeler  5-7  So  GreenWood Elite 15U (Ferndale): If he’s not the fastest soph in the state with the ball then he’s close, with the special ability to create and finish at that speed.

Curtis Williams  6-3  Fr  The Family 14U (Detroit): Good frame for a rising freshman and was a contributor for Cass Tech in June. His father of the same name was a favorite in the early years of The Bank, a chunky do-it-all player from Detroit Central.

Keegan Wasilk  6-2  Fr  The Family 14U (Clarkston): The youngest of three brothers to play at Clarkston and looks like the most talented, as he led the Family 14U in scoring often in the spring, and did it with his high school team in June.

Devin Womack  6-1  So  Playmakers 15U (Ann Arbor Huron): Another one from Huron’s loaded rising 10th-grade class. Good patience, size and vision at the point.

Ty Wyman  6-2  So  Parallel 45 (Blissfield): He was on the diamond in the spring, pitching for the legendary Larry Tuttle, to a diamond in the rough on the circiut. Nice length and offensive skills, just needs some AAU toughness.

Omar Zeigler  6-4  So  Playmakers 15U (Detroit King): A lot of expectations come with that surname in Detroit basketball, and Zeigler seems up to the task. Big body at the 15U level and produces inside, on both ends, accordingly.

Home away from Home: REACH over Playmakers in 15U battle
313 Holding it Down at NY2LA Summer Jam