Home away from Home: REACH over Playmakers in 15U battle 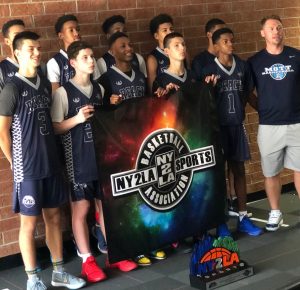 The REACH Legends beat the Michigan Playmakers for the NY2LA 15U title in Milwaukee.

The first half of the Next Level Invitational in Milwaukee includes a bracket of teams from the NY2LA circuit. The 15U tournament concluded with two teams from the Mitten, REACH Legends and Michigan Playmakers, battling it out in the only no-A.C. gym in the building in front of just a pair of college coaches — Northern Illinois head man Mark Montgomery and Oakland assistant Myke Covington — but a raucous crowd of family members. Pure grassroots ball, and the participants didn’t disappoint with some of the best young talent in the state going back and forth until the final minute with REACH prevailing.

It was a true team effort for REACH, which needed defense and off-ball toughness from its frontcourt and clutch shot-making from its backcourt — and both delivered. It’s hard for most 15U players to escape their teenage myopia to really grasp that they’ve accomplished little in the game and are at the bottom of the ladder. One would assume 6-4 Ann Arbor Huron soph Julian Lewis has spent his formative years getting schooled and whooped by his two older brothers, so he knows the score and “plays the right way.” He was competing like it was a college tryout and state championship game in one, hustling all over the court, setting screens, scoring in diverse ways and rarely leaving the court. Lewis could challenge Detroit Douglass’ Pierre Brooks, Bank Hoops’ No. 1 2021 recruit, as the most complete player in the sophomore class. If he gets the brawn of brother Michael, who was an all-defensive team selection and four-times academic All-GLIAC for Wayne State, or height of brother Avery, a 6-6 freshman at SVSU, Julian could end up a high-major recruit. REACH’s unsung hero is 6-3 Walled Lake Northern sophomore Kevyn Robertson. He was an absolute battler defending the post, good fundamentals walling it off, who can also come out and check on the perimeter. He cut hard and smart for scores in the halfcourt and put pressure on the Playmakers by consistently running the court hard. REACH point guard Brody Parker, who was Troy’s sixth man as a freshman, takes a lot of guff from the brothers but is growing into a dog as a result. He got into the lane and hit tough shot after tough shot, acrobatic and over the rim, down the stretch, and also showed he’s a dangerous drive-and-dish playmaker, shifty off the dribble. The drive opens up even when the shot’s not falling consistently, because he’s already well-known as a shooter. REACH starts a pair of point guards with Parker, the mercurial talent, and the zen approach of Rochester Adams soph Ethan Emerzian. He plays at his pace and doesn’t get rattled taking the ball A>>B to set up the offense.  An assassin who picks his spot with the high-arcing three-point shot, and also has a money pull-up shot. Great hands on D, able to poke away the dribble. 6-1 Utica Eisenhower soph Anthony Cukaj is new to the team but hit right in, hitting timely three-pointers.

Farmington High coach Terrance Porter has one of the best backcourts in Michigan, and it’s made up of rising 10th-graders. 6-0 Playmakers sophomore Tariq Humes reminded us once again that it’s not just Jaden Akins for the Falcons. Humes was able to repeatedly beat REACH’s guards off the dribble and then finish the deal with toughness and creativity in the lane. He drew a number of fouls at the rim. 6-1 Playmakers soph Devin Womack is part of the loaded 2021 class at Ann Arbor Huron. He’s smooth with the ball, a big-step creator for his shot or others’. When his team needed it he turned to the former, scoring the first two buckets of the second half to give the Playmakers a lead. He was key to the halfcourt offense, not a probing ball-stopper like so many 15U guards, Womack kept the pill hot. He showed some nice athleticism on a tip-in and with a finish over defensive ace Robertson. In previous matchups, 6-4 Detroit King sophomore Omar Zeigler has had his way with REACH. He’s a methodical post player who can physically outmatch most underclassmen. He had one very tough interior score when he got on offensive rebound on one side of the lane and finished it on the other, like straight out of Coach Joe B. Hall’s “superman drill.” Zeigler had another tough put-back in traffic. He was a shot-blocking threat on the other end. With all those evident tools and given his past success as the measuring stick, it just wasn’t OZ Jr.’s day against the spirited REACH frontcourt of Lewis and Robertson. Another MLK player, Walter Herndon, battled inside, which you can get away with as a 6-foot center in AAU. 6-0 Berkley soph Arshad Walker is able to turn the corner and had a nice Euro step finish.

Website Update
Brawl for the Ball: 15U recruiting guide