313 Holding it Down at NY2LA Summer Jam 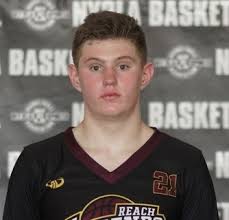 The offensive skills of 6-7 Davis Lukomski were on display for the REACH Legends 17U at the NY2LA Summer Jam.

The NY2LA Summer Jam in Milwaukee is one of the top national events in July’s second live viewing period. The REACH Legends 17U and 16U teams and a former Detroit PSL star acquitted themselves well there Friday, where Braeden Proctor breaks it down.

Tyson Acuff  6-2  Jr  REACH 16U (Detroit Cass Tech): Quick first step, gets a shoulder into his man then is able to change directions so fast and accelerate quickly. Does a good job of snaking defenders off screens and getting them on his back. Leading scorer for REACH 16U, picking up where he left off a just a few days ago again in Milwaukee.

Harlond Beverly  6-4  Sr  REACH (Montverde Prep FL): The main high-major attraction for the REACH Legends. Looked good off the catch, with a nice hoops IQ to find the open spots like a true 2G. Countered the 3 with slashing moves. Points were coming easy for him and looked like a legit top 50 national prospect, particularly because at the same time he handled pressure and passed it like a point guard.

Connor Bush  6-4  Jr  REACH 16U (Belleville): Learning that in summer ball you want to show what you’re good at, and not work on improving weaknesses while coaches are watching. In Bush’s cases those good things are taking advantage of his athleticism by running and finishing in transition; crashing the glass hard from the wings; knocking down catch-and-shoot 3s, of which he made three in his game.

Colin Golson  6-5  Jr  REACH 16U (East English Village): Very productive post for the 16U level, who is very left-handed but used his strength to finish high over Northern Kings’ bigs. Nice touch off his right shoulder. Sets good on-ball screens.

Dajion Humphrey  6-2  Jr  REACH 16U (Southfield Christian): He shot it well in the first live period session and continued to do so here. A 2G and not a point guard, but has great IQ moving off the ball. Really good defender who moves well laterally and uses quick hands.

Tray Jackson  6-8  Pg  Meanstreets (Sunrise Christian KS): Got the better of the Sizzle’s big man with quick hand and reflexes, getting a hand on the ball to disrupt his offense rhythm. But offensively an old bugaboo appeared, kind of just floating on the perimeter. He’s a confident shooter with a good release but can settle for the shot. Kept it up defensively in the second game, blocking shots. Hit a nice step-back 3. He’s a streaky good shooter who could be a consistently good one with a release point more to the left side of his face.

Davis Lukomski  6-7  Sr  REACH (Novi Catholic Central): Looked the part of a D1 forward offensively, running hard end to end and shot-ready in the corners. Good build and was able to go inside where he was strong with the ball, pump-faking and finishing. Looked good in the first half, but didn’t play much in the second.

Carrington McCaskill  6-7  Sr  REACH (Detroit Renaissance): Showed how good he can be when dialed in. McCaskill was focused and took care of the ball. Rim ran consistently and relocated on dribble drives for easy dump-offs from the guards. Used his length to rebound and protect the rim.