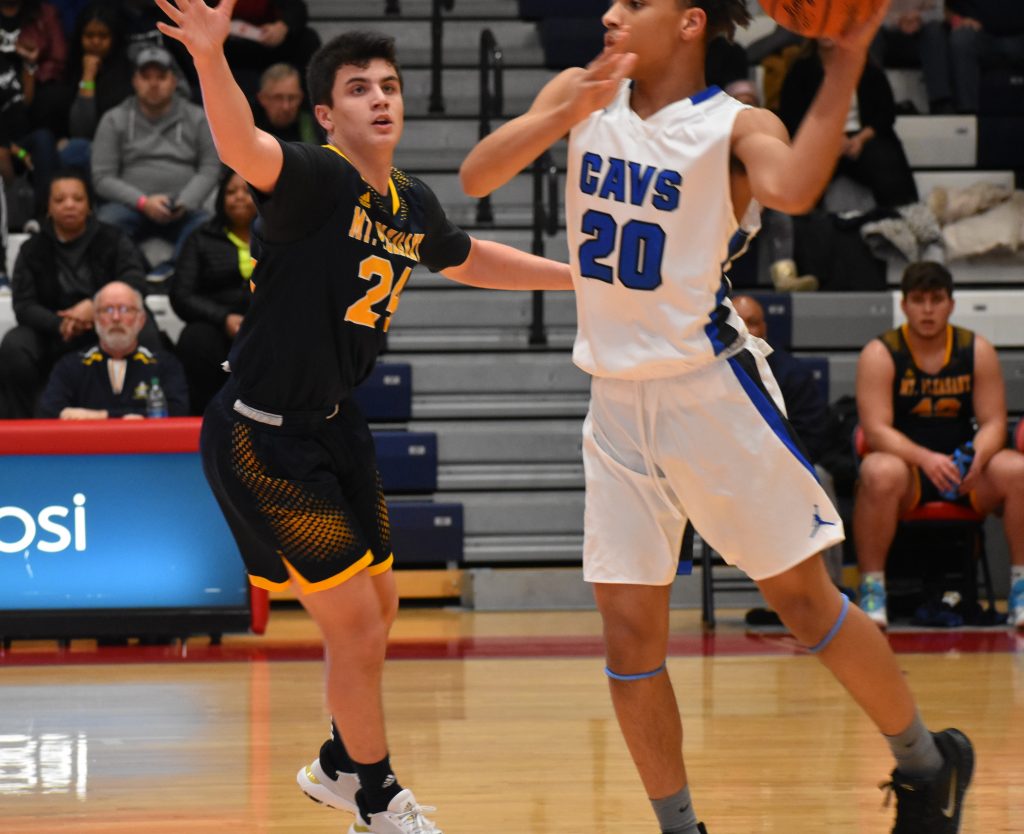 Kabir Bergen  6-6  Sr  Ann Arbor Skyline: Ideal D3 recruit with his size and grades. A pick-and-pop 4 man who has a nice looking shot from 20 feet. A smart position defender, but not very athletic so won’t be stopping or pursing the ball above the rim.

Chris Cayton  6-0  Jr  Ann Arbor Skyline: A steady hand who took care of the ball, getting A to B against hectic Bridgeport defense, and knew how to get to his spots to get his own points, scoring 19. Hit a 3 off the dribble, and later had the other kind of three-point play at the rim. Made good decisions that didn’t always result in assists. Didn’t do it often, but not as good as a pure one-on-one scorer than when getting his within the offense. Needs to strengthen his wrists, snap those passes so they don’t fade and take shooters out of rhythm.

Mehki Ellison  5-11  So  Flint Carman-Ainsworth: He was playing on the homecourt of his older but not taller brother Malik Ellison, the former Flint Beecher star who plays for SVSU. Mehki is a heads-up lefty who keeps eyes to the rim as a finisher and will make things easy for teammates on the break. Sweet scoop shot. The only time he really looked like an underclassman against Mt. Pleasant was once getting swallowed up o a blocked snhot.

Parker Day  6-6  Sr  Saginaw Heritage: He scored 15 in a loss to Glen Lake, including six via some of the more entertaining buckets of the day — a two-handed alleyoop slam (after which he received a T for hanging on the rim … which was highly questionable), a contorting layup off the break at full speed, and another dunk. Hit from mid-range as well. Not a 4, not a 3, will have to work on his handles and/or bulk up over the next 18 months.

Mason Docks  5-11  So  Williamston: Slippery and skilled, evolving from a freshman prodigy to as a sophomore to the leader of one of the state’s best teams. Terrific defender, particularly for an underclassman. Powers junior point guard Jesse Carpenter got by him easily once, but that was the wakeup call for Docks and he was locked in from there, and later forced a one-on-one over-and-back. Also had a blocked shot. Can get the ball where he wants to and is a creative scorer around the hoop despite his size. As good as his handles are, sometimes over-dribbles and doesn’t go anywhere, or dribbles too deep before deciding to pass.

Reece Hazelton  6-7  Sr  Maple City Glen Lake: How does Ferris State stay good? Well, two other 6-7 forwards at this event have offers from CMU. Hazelton did more than either of them, both in terms of productivity but also versatility. He scored 20, including the game-winner, as Division 3 Glen Lake beat Division 1 Saginaw Heritage.

Jaylen Hodges  6-3  Jr  Bridgeport: The kind of athlete who would be a plus high school player just running around making plays off the ball … but Hodges does so much more, and scored 25 against Ann Arbor Skyline. His first two field goals were from behind the arc, then his dunk with a minute to go was the dagger. Dynamic, aggressive and skilled. Can shoot the three, hit tough pull-ups, or slam. Attacks hard, but then has body control around the hoop. And just when you think he’s going to pound one, Hodges had a jump stop, head/ball-fake layup, just a hooper.

Brandon Hunt  6-7  Jr  Williamston: Continues to get better. Moves his feet really well on defense and looks like he can guard the wing at the next level. Still thin but will stick his now in on the glass. Gets off the floor, easy, quickly, naturally. Offense is erratic, but isn’t always given the ball in ideal spots. When he did catch it in the good spot looked really good with extension and touch on a hook.

Owen Lobsinger  6-7  Jr  Flint Powers: Powers is one of the more disappointing teams in Michigan — a 16-point deficit to Williamston was the closest they’ve been in the midst of a three-game losing streak — so this clearly goes beyond Lobsinger, who had one field goal, a three-pointer, in this one. Nevertheless, the disconnect between his physical tools and production is glaring. Doesn’t rebound much, post up at all, run hard, or provide toughness. Looks like a kid who has had a basketball trainer, but not an actual basketball coach.

Kevin Mills  6-8  Sr  Bridgeport: Liked his potential earlier in the season against Alma, and looked less raw here. Slim but active, long and quick. A rare outside-his-area rebounder on both the defensive and offensive end. When he keeps the ball high to finish is an offensive asset. Should not dribble right now, but shot looks like it could come around in college. When he did miss an 18-footer, to Mills’ credit he didn’t hang his head but got back on D and blocked the ensuing Skyline layup attempt. His more impressive play, though, was when the tallest kid on the court was the quickest one diving on the floor for a 50/50 ball.

Joseph Ostrowsky  6-0  Sr  Mt. Pleasant: He was the best player on the court at this event last year when Mt. Pleasant beat Orchard Lake St. Mary’s, and was yet again in a comeback win against Flint Carman-Ainsworth to improve the Oilers to 10-0. He hit a stretch making three-straight 3s in the second half, the ultimate in the  fourth quarter from SVSU’s logo, bringing down the house, and basically announcing MP wasn’t going to lose. He then assisted Mason Wojtusik for a 3 to tie the game midway through the fourth, then assisted on the go-ahead hoop. Very quick release. Despite scoring a game-high 25 points, Ostrowsky did it as a point guard, just quick and smart enough to keep defenders off balance and get to his spots, and made some tough deliveries in the lane. D3 coaches couldn’t have been pleased that so many GLIAC coaches were in the gym to see this performance.

J Wallace  6-4  So  Williamston: A college guard but a forward in most of Williamston’s lineups and lived up to the challenge, posting up, pounding the offensive glass and hitting mid-range shots.

London Williams  6-1  Sr  Bridgeport: Lefty guard is a tough cover going downhill. Smart passes pushing the break or when getting over traps. Even when using spin dribbles, saw cutters and got them the ball.

Mason Wojtusik  6-3  Sr  Mt. Pleasant: Hit a huge 3 in the fourth quarter as Mt. Pleasant rallied to beat Carman-Ainsworth, then a big rebound and free throws at the end. Quick leaper with some wingspan. Plays well off of Joseph Ostrowsky, who knows where to find him, but is also pretty smooth off the dribble to score himself. Can pay too upright and casual at times, though he did strip Mehki Ellison at one point.

Noah Adamczyk: No fear in this freshman
King for a Day: Q. Davis is everyman, and superman