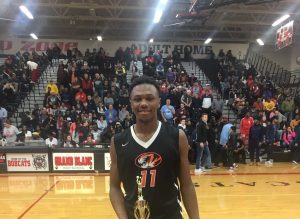 There’s no point of basketball history in Michigan that a game between Benton Harbor and Saginaw wouldn’t draw, and reward, a crowd. Back to 1941, when Benton Harbor beat Saginaw in the Class A final. Saginaw won the title the very next year and neither program has ever really left. Saginaw has had a state championship team as recently as 2012, while Benton Harbor won the Class B crown just last spring. 6-5 junior Carlos Johnson was the hero of that championship game, and was again at Grand Blanc’s Gotta Get It Classic, where he scored 39 with 14 rebounds in a 79-70 defeat of the Trojans.

Between performances like his in the state final, or this one against The High — as good as any we’ve seen this season — Johnson’s name will someday be mentioned with the legends to play at these two basketball institutions like Draymond Green, Chet Walker, Tony Smith, Wilson Chandler, Ernie Thomas, Pig Miller, Larry Savage, Earl Brown, LC Bowen, Peeper Roberson and Jack Forestieri.

Johnson took over against Saginaw in the third quarter, hitting a flurry of three-straight three-pointers and finishing with 20 points in the period. He’d opened up those looks by slashing through the Trojans’ defense with his pet spin move that happens so fast it gets you even when think it’s coming. Then when they played for the 3, he went to the block and scored off the glass. He hit a variety of improbably difficult shots around the rim and got to the line, where Scooby has a soft shot. Even Johnson’s misses were often positives as when he pushed the ball in transition even if the first shot didn’t go down there was a good chance he’d get his own miss or 6-7 senior Chris Conway and 6-6 senior Justin Brown would make the second.

As complete and versatile a scoring performance as Johnson had, it’s not the first 39-point game of the season. It was the dominant scoring in the midst of playing the rest of the game fully that makes it an elite high school performance. An example of his two-way domination, on successive plays Johnson made a three-pointer off a blob, then intercepted the pass on a Saginaw blob. He covers all he bases in a half-court defense, able to check guards off the dribble, block shots in the lane and close out under control. The Trojans didn’t make a jumper over him all game. One series saw Johnson close out to the top of the key then keep his feet to get back to the left baseline to force a loose ball when the shot missed. He triggered Benton Harbor’s transition offense with outlet assists and pushing the ball himself.

Michigan has been showing increasing interest in Johnson, and with his work ethic and track record could thrive there. Many MSU fans hope the Spartans pull the trigger as they see him as a mix of athleticism and grit on the wing that is the program’s ideal. He has an offer from West Virginia, not surprising as Johnson possesses player character traits that Bob Huggins has coveted since he was recruiting Flint kids to Akron. He can fill a lot of roles and bring a winning pedigree to the highest level of college ball. 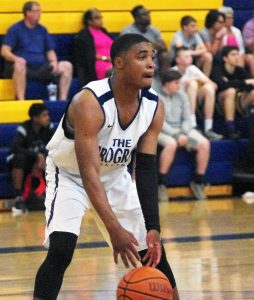 Saginaw’s Freddie McIntosh is one of the state’s top junior point guard prospects.

Representing his program’s historic pedigree on the Saginaw side was 5-11 junior Freddie McIntosh. He’s explosive, aggressive and fearless off he dribble. If he gets his shoulder in you be worried, if he gets his hip in there you’re dead. He scored 21 points. Defensively bullied Benton Harbor’s guards at times. His mid-range game is coming around and looked unflustered hitting a deep three-pointer to beat the halftime horn. McIntosh has the competitive and leadership qualities of a player like Ja’kavien Lewis, who is having a strong freshman season at Northwood, but with more offense at the same age.

NCAA: Changes coming for travel teams
Oakland ahead of the curve with forward offers