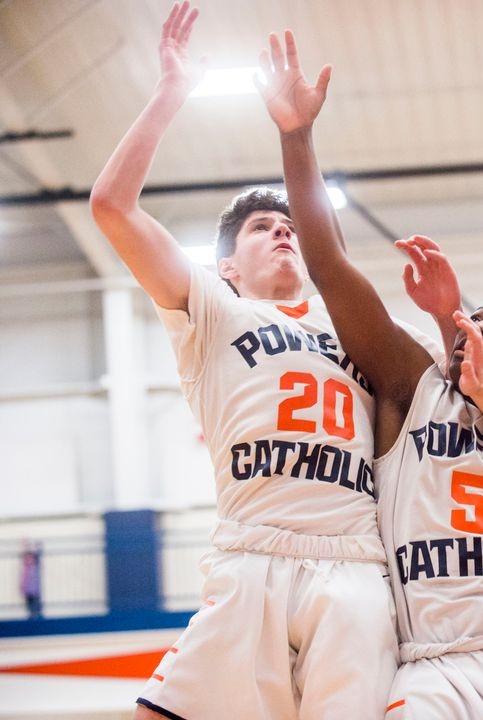 Flint Powers’ Owen Lobsinger is one of the top forwards prospects in Michigan’s 2021 class.

Braeden Proctor returned to his alma mater and found these prospects at Central Michigan’s team camp.

Logan Cornwell  6-1  Sr  Howardsville Christian: Howardsville Christian wasn’t at full strength with all-state senior Dylan Jergens out with a broken hand. They’ll be a serious threat to make it to Breslin in March with Jergens, his sweet-shooting sophomore brother Jason and Cornwell. Logan is undersized but with a wide, broad frame that allowed him to absorb contact with ease. Good straight-ahead speed, attacked closeouts and finished through contact. Good Class D player.

Chris Derocher  6-5  Sr  Alpena: He’s one of the state’s best unknown players, as Alpena’s not on the way to anywhere and after not playing AAU when younger because of baseball this spring he was on the roster of a little-known program that skipped both one of the April NCAA dates and the Run-n-Slam/Jamfest weekend. Strong kid who played under control and kept everything was off two feet under the hoop. Derocher loved going left then going into his opponent’s chest and finishing with his right. Will need to add a left at next level as bigger/stronger players will block that. Sunk back-to-back Smooth pull up 3s in transition with good rhythm. Played with some nastiness on defense. Chested and shouldered opposing players inside by the rim and got them frustrated.

Reece Hazelton  6-6  Jr  Maple City Glen Lake: He’s a natural wing forward with the toughness of a 4, but spent a lot of time running the point and thus struggled to shoot or even get shots when at point guard early on for Glen Lake. He did hit a 3 from the wing in transition when Okerlund found him. In that situation, one of Michgian’s best shooters in the 2020 class with size and a nice release. Took advantage of his size differential against Quincy for post-ups, with good footwork and strong finishes. Competitor but needs to channel it, as body language wasn’t great against Flint Powers when teammates would miss shots. Attacked a closeout baseline well late in the game.

Davis Lukomski  6-7  Sr  Novi Catholic Central: Has a nose for the ball and putting it in the hoop, great at drawing contact and draws fouls at a heavy rate. Strength helps some of those become and-ones. Best when finishing off of two feet. Ran lanes hard on the break. Slow feet defensively and can struggle on D in the full court.

Owen Lobsinger  6-6  So  Flint Powers: Blocked shots help-side thanks to length, and it looks like Owen’s grown since just AAU. Pretty good shot coming off a pitch. Had a good iso breakdown and kick to a open teammate in the corner. Showed he has some on-ball ability. In Powers’ second game displayed a good shot, hitting a wing 3 and iso step-back, and also again drove and dished to shooters well. Has a good triple-threat fake jabs step pull-back. For large stretches he outplayed one of the state’s top 2020 forwards Glen Lake’s Reece Hazelton vs Glen Lake.

Xander Okerlund  6-4  Sr  Maple City Glen Lake: He looked like one of the top 2019 prospects in Michigan when lighting up DEPSA in the Class C state final in March, and does again now that he’s back with his high school team. In front of CMU’s coaches scored 10 of Glen Lake’s first dozen points against Novi Catholic Central. Okerlund’s revamped his shot with a higher release and it looked good here. finished well with weak hand. Shielded ball well with body. Very smooth mid range shot, keeping the ball high, clean release and balance. Quick shot with great balance coming off screens. Finished well with weak hand, shielding the ball with his body. Offensively he is one of the better players in the 2019 class. Defense tbd.

Noah Pruitt  5-10  Jr  Okemos: He wasn’t fazed by DEPSA’s size, as he passed through it and used his quickness to back dribble out of traps before they could get to him. good court awareness, he sees the floor. Pruitt has a little bit of a hitch in his set shot but he has gotten more lift on it than when I saw him in the high school season.

Justin Rukat  6-7  Sr  Novi Catholic Central: He ran the floor well for easy finishes and had good spacing. Soft shooting touch 14 feet and in. A little slow laterally on defense but on offense he seemed a little more nimble. Passed well from high post in hi-lows. Kept the ball high when he caught it inside and finished quick before defenders could react. Decent small college shot-blocker thanks to quick reflexes. High-end grades.

Evan Thomas  6-3  Sr  Okemos: Do-it-all type at the high school level who produced across the board for what looks like it will be the deepest team in the Lansing area. Gets a lot done with sneaky athleticism. Quick first step with the ball and finishes well with weak hand. Smooth going downhill. Good length for a small college guard.