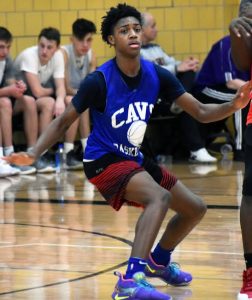 The future comes at you fast. Top 25 2021 recruits Jaden Akins of Farmington, Andrel Anthony and Marcus Wourman of East Lansing, Jayden Nunn of Flint Carman Ainsworth, Brody Parker of Troy and Brendan Sullivan of Davison were among the standouts of Corunna’s post-Thanksgiving scrimmage.

Jaden Akins  6-3  So  Farmington: Talented left-hander who played to the level of the competition. Looked confident with good reason knocking in shots from the top of the key, but not as easily from a couple feet beyond. Plays both guard spots and used height/vision to make things simple with kick-ahead transition assists. Smart and good instincts defensively so good when jumping and gambling, though sometimes got caught playing upright.

Andrel Anthony  6-4  So  East Lansing: Looks like he’ll be one of the top basketball/football prospects in the 2021 class, coming off a productive fall as a wide receiver. Long, aggressive, stretches out to finish and had a number of attention-grabbing dunks. Good second bounce on the glass. Needs to improve his half-court defense.

Mike Fletcher  6-7  Sr  Flint Carman-Ainsworth: He’d be a top 10 2019 prospect as a mid-major hoops prospect. Instead he’s going to MSU for football. Carman ran much of its half-court offense through Fletcher, a good passer whether from the high post or inverting to the wing. Few high school players are able to keep him off the boards or from rooting out post position. Missed more chippies than you’d like, often getting his own misses.

Logan LePage  6-3  Sr  Corunna: Big, athletic guard who is physically reminiscent of Lake Superior State’s Sam Cornett. Third-year starter who plays hard the whole game, on both ends. Gets points most effectively in transition and put-backs. Jumper has improved as has his handle; needs to know when to pull up once space has been created.

Blake Lund  6-0  So  Linden: He tied the school record for three-pointers in a game with seven, a record that looks endangered in Lund’s sophomore season if how he shot it here was any indication. The 3 ball wasn’t just falling, it was often barely making the net move. Got them within the offense, though sometimes that included in defenders’ faces. Showed his point guard bonafides when teams would press late, good at getting open to retrieve the ball, then confident and strong once he got it. Competes on D. Horizon League prospect at least.

Jayden Nunn  6-2  So  Flint Carman-Ainsworth: At his best getting up-and-down, with Nunn really in his element and the full repertoire in use when Warren De La Salle had to press late. Doesn’t have the vocal presence of departed point guard Jakavien Lewis.  When running point didn’t sit on the ball and kept teammates involved. Moved and cut when he didn’t have the ball. Scored with a floater in the lane. Has the change of speeds and wiggle of a high-major guard when he’s going downhill, with hangtime to finish. Shot needs to get to that level as well; more legs, less wrist. Decently in-tuned and active defensively.

Andre Price  6-5  Sr  Walled Lake Northern: WLN has an intriguing frontcourt with Price, 6-7 senior center Jack McGuire and 6-2 sophomore tweener Kevyn Robertson. Price is raw but makes his presence known by running hard on the break and hitting the glass. Active on defense, can block shots.

Will Smythe  6-0  So  Warren De La Salle: While not at a full strength post-football state championship, the Pilots were still very competitive, with Smythe claiming some nice moments. Hit some three-pointers with a high arcing shot. Skilled and clever at creating space. Got lost on defense a couple times. Didn’t try to take on too much on the half-court, made smart skip passes. Scrimmages are one thing, physically he’s going to beat up in the Catholic League grind.

Marcus Wourman  5-10  So  East Lansing: Doesn’t wow you in warmups, but there have been a lot of successful MAC guards with Wourman’s size and body type. Good feel and vision, thinks on the move and is able to deliver the ball securely out of situations that may look chaotic to most. Ahead of the curve because he plays off two feet with the jump stop, but with one hand on his passes. Didn’t see much deep shooting.