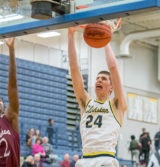 Clarkston 7-0 junior Matt Nicholson has an offer from Ferris State, with the MAC likely to follow.

It was a rare chance in a high school game to see two future college centers matched up the whole way, when Clarkston and 7-0 senior Matthew Nicholson beat Lake Orion with 6-9 senior Nate Talbot, 58-37. Clarkston has won four straight, while the Dragons are now 5-1.

Matthew Nicholson  7-0  Jr  Clarkston: 7 points (2-6 fgs, 3-7 fts), 16 rebounds (12 def/4 off), 3 blocks, 3 assists … He had his lowest scoring output of the season. Part of that was Talbot pushing him off the blocks, and other times it was Nicholson putting himself out of position, getting too deep trying to go under the basket and use it to protect the ball. Everything was off of one foot. Looked better late when he hit a pair of hooks. He’s Clarkston’s best passer, which allows them to run through the offense without it clogging down. Where he struggles in the offensive half-court is as a screener, as Nicholson is just so much taller than high school guards it’s hard for him to find them. Got all the rebounds he should have and crashed hard for a couple outside his area. Was cognizant of finding Talbot and putting his body on him when a shot went up. As he got out of position as a post scorer, so did he as a post defender, jumping at everything trying to block it when walling off would change more shots. Twice on blocked shots he was able to corral the ball himself. Two of the blocks were against Talbot, rejecting a layup and hook. Runs the floor easily. Optimistically, Nicholson is ahead of at the same age future pro bigs like Chris Kaman or Shayne Whittington. But there are many more promising, athletic young centers we don’t remember. MAC should be offering.

Nate Talbot  6-9  Sr  Lake Orion: 11 points (3-12 fgs, 5-8 fts), 4 rebounds (2 def/2 off), 0 blocks, 0 assists … Scored 11, but over half of them in the fourth quarter when Lake Orion was down 20. Did a good job playing position defense going against a taller player for the first time this season; lower, wider, stronger than Nicholson. Was flustered by Nicholson’s length, missing a layup even after cleanly pump-faking the Clarkston junior out of the picture. Set solid screens. Showed improved patience kicking out the ball to re-post. Headed to Wayne State. Could have a career trajectory similar to Ferris State’s Cole Walker.