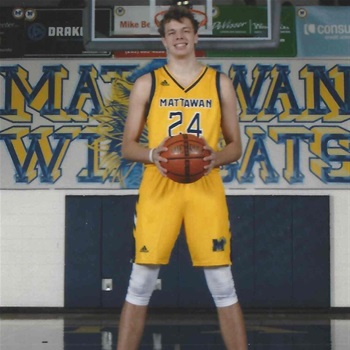 The year was 2001. That was Mattawan’s first season as a Class A school — and they were 20-0. The opening district game matched them with Kalmazoo Central at Battle Creek Centrals fieldhouse. Before he would catch two Super Bowl touchdowns for the Packers, a young Greg Jennings won the district game for K-Central with a 35-foot bomb at the buzzer. The Maroon Giants would go all the way to the state title game, losing to Lester Abram and Pontiac Northern.

Eighteen years later a new generation from Mattawan entered the Division 1 state tournament undefeated, 18-0, to face Kalamazoo Central. Unlike the showdown in the millennium, there was no neutral site, as Mattawan’s gym features one of the largest student sections around, and it was standing room only. Nor were there any buzzer-beating heroics this time around. After not having defeated Kalamazoo Central in a dozen years, the Wildcats did it for the second time this season, emerging with a 34-31 win. Someone who was there then and now, Darryl Matthews, checks out this prime matchup for Bank Hoops.

The low score wasn’t due to tempo — the teams got up and down, they ran their sets. There were just lots of missed shots and turnovers. Senior guard and super sub Luke Pelak came in and righted the ship for Mattawan, steadying things right when the game was taking the feel that K-Central’s speed could prevail. Pelak bothered the Giants’ guards on defense and applied pressure when he was on offense with both a nice stroke and quick, penetrating drives. And yet, it was 18-18 at the half.

Further offensive futility after the break at least played into the hands of 6-4 Kalamazoo Central sophomore Gerald Crawford, literally. Introducing this Rodman-esque rebounding machine. He grabbed many out of his area, and was also very adept at tipping the ball to himself. He finished with 16 boards — eight on each end. 6-7 Kalamazoo Central junior Justin Davis had a dozen rebounds himself, if this helps you know what kind of a shooting night it was. The both did a great job keeping Mattawan, aka 6-10 senor Nolan Foster, off the glass.

After Kalamazoo Central had pushed Foster out to the wing to attempt shots in the first half, he went inside in the third quarter and hit a couple of very nice post moves.

Kalamazoo Central had a number of good looks in the game’s final 30 seconds, but as it had gone all night, they didn’t fall. They had one last chance with four seconds to play, but turned it over with an errant pass.

Foster was the game’s high scorer with 14 points. Standout senior guard Dexter Shouse was headed for a double-digit night but for struggles at the stripe.

Kalamazoo Central was led by the “Tyson Acuff of the Westside,” 6-1 junior guard Trevon Gunter‘s 10 points. The Maroon Giants got an uncharacteristic 0 points from senior guard Jadakiss Lewis. He was the lone senior in Kalamazoo Central’s rotation, which speaks to a bright future after finishing the year 14-5.

For Mattawan, the future is now. They played seven seniors in an eight-man rotation, are 19-0 and now the heavy district favorite going into Wednesday’s semifinal with Portage Northern, defeated by the Wildcats by margins of 13 and 16 in the regular season.