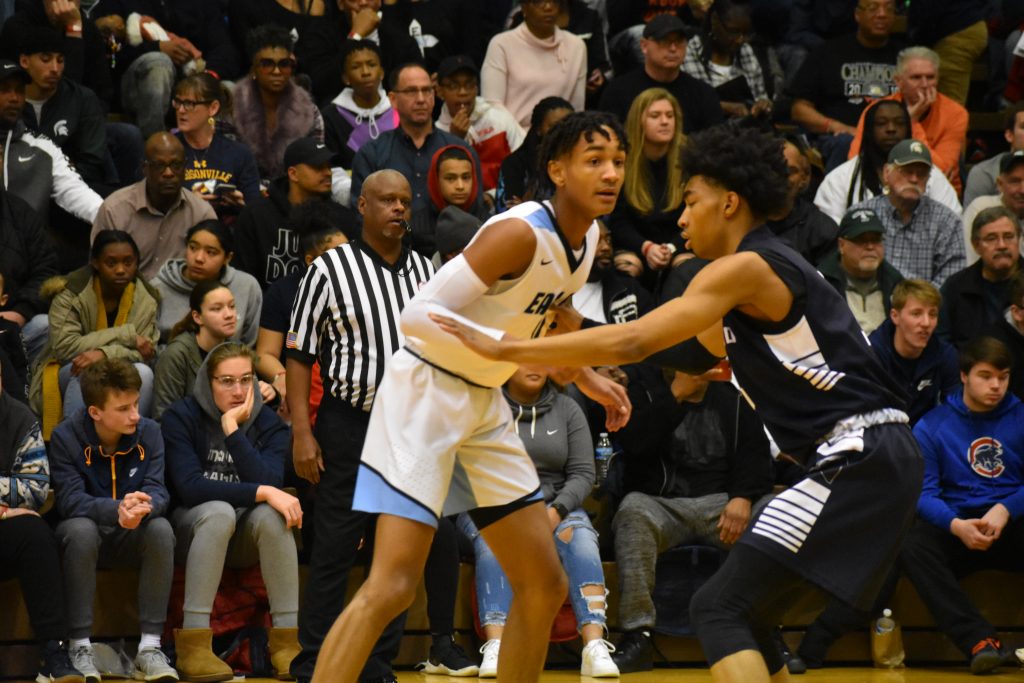 Two of the best guards in American, Kobe Bufkin and Jaden Akins from this past season in Grand Rapids.

Grand Rapids Christian guard Kobe Bufkin became Michigan’s third commitment for the 2021 class when he chose the Wolverines over MSU, LSU, Ohio State and DePaul. Here’s a snapshot from over two years of coverage of Bufkin as he arose from local prodigy to elite national prospect.

June 2018, REACH July Warm-Up:  With East Lansing’s Andrel Anthony sidelined due to a broken hand, UTS is down to one talented do-it-all 6-3 guard. Kobe moves easily to cover space with the ball with the glint of a high-major prospect. Left-hander who has the potential to blow by his man seemingly whenever he touches it. Will take some high degree of difficulty shots away from the basket, without yet balancing that out by mastering the grinding high-percentage ones. A similar 2021 prospect, Detroit Country Day’s Julian Roper, is ranked a slight notch ahead of Bufkin because he’ll go in there and hit someone and get dirty. Kobe showed some nice spring when he was called for a goal tend against GreenWood, then some offensive skill and awareness with a strong baseline drive for a three-point assist on the pitch. Good skill, confidence and quickness with the ball when UTS spread the floor with the late lead.

July 2018, Brawl for the Ball: One could make the argument that this hybrid of past GR Christian guards Deleon Brown and Drake Harris is the most naturally gifted 2021 prospect in the Mitten after seeing UTS Elite’s run to the 15u gold title. Which included Bufkin throwing an alley-oop off the backboard … to himself. Far from his only dunk. Flashes next-level talent three or four times a game with separation, elevation that high school guards can’t defend. His length, skill and mobility are elite percentile for his grade; both quick and smooth. Accelerates with the ball. Has composure and feel for the game and was under control when attacking the defense, surveying the floor and looking for teammates. Has some pro elements to his offensive game, posting up guards and backing them down.

September 2018, Bank Hoops All-State Camp: The most physically gifted kid in the camp, but already a legit all-around player not just an athlete who would “flash.” Not that there weren’t those, too, like when Bufkin effortlessly flushed an alley-oop off the glass. Could take it up a notch and create his own points when he wanted — creating space and elevation on difficult shots that he made look simple — but often looked to pass first which was a wise move given the talent on his team. Able to extend and reach rebounds. Loved how he sprinted back on defense after his own missed shots instead of moping. Should learn to finish as strongly with right hand as left.

“High ceiling player,” a coach said. “Continued development could put this kid at high-major status. He can do it all and has the size and elite athleticism to play with anyone. Competes extremely hard on the defensive end and used his length to his advantage with active hands. Scores on all three levels and finishes above the rim when the opportunity presents itself. Played well in transition and half court.”

November 2018, Preseason Scrimmage: Young and slender, but played tough, attacked the glass and went at players inside. He has quick hands and is a versatile defender who against Hudsonville checked both a small point guard, Max Perez, and taller player, Stone Smenge, equally well. Uses his length on both ends of the floor. With the ball Bufkin is dangerous using screens because he can snake off them, shoot or make plays. Changes pace with the ball and uses head fakes and inside-outs to further open up things.

February 2019, Redhawks Showcase: K-Central’s older, much stronger guards gave Bufkin and his slender frame some problems, able to knock him around and redirect him in the half-court. Thus he did most of his damage in transition where he was able to get clean looks, using both hands around the rim and showing his talent and body control. Led the Eagles with 15 points.

April 2019, EYBL: Has a rare combination of smoothness and sudden quickness and explosion with the ball, talents that project to the highest level of college hoops. Left-handed shot-creator who can get up and get the ball above the rim. Showed some toughness on the glass but needs to get much stronger. A playmaker on defense, with quick hands for steals and spring to block shots.

April 2019, EYBL: His national rep took a huge bump in Indianapolis for the player who may have the most upside in the 2021 class. Very long arms and legs make me think he will still grow. Even if not he has great length already. In the title game Sunday he grabbed a ton of rebounds and blocked quite a few shots thanks to his length and his verticality. Very slippery with the ball. Not necessarily explosive but he knows how to get to his spots under control and strong. Very good playing off of pick and rolls and making reads. Good decision maker who sees the floor. Athleticism continues to improve. He’s gotten to the point where he’s getting dunks almost every game and he needs less and less space to do it.

November 2019, Preseason Scrimmage: Did nothing to dissuade those that see him as the state’s No. 1 2021 prospect. His ability to stop, decelerate, rise, extend and shoot make him impossible to guard for regular high school players. More aggressive as an upperclassman, and spent a lot of time at the line. Bouncy and covers space on defense; blocked a three-point attempt by East Kentwood’s all-state point guard Ja’moni Jones. Played a lot of point guard and is a willing passer, can run the pick-and-roll but sometimes needs to KYP.

February 2020, Red Hawks Showcase: Bufkin scored 15 points on 5-of-11 field goals, including 2-of-5 three-pointers, and 3-of-7 from the line. Jaden Akins scored 24 points on 7-of-19 shooting, including 4-of-11 from behind the arc and 6-for-6 at the line. Grand Rapids Christian has won without Bufkin as its leading scorer, and did so again here. Farmington has little chance without Akins pacing them which results in some highly difficult shots … he made three three-pointers heavily contested by Bufkin. That Bufkin knows Akins’ game so well, is his physical/athletic peer, if not superior, was dialed in and taking in personal — and still Jaden was able to get off shots, that’s talent. Even with the scoring burden Akins nevertheless he’s an able and willing passer with good vision from up top and a rare post-feeder. Bufkin as a point guard is more likely to break you down off the dribble, and also had a sweet halfcourt, 20-foot assist to MVP Donovan Brown-Boyd under the hoop. Bufkin can elevate with touch off the dribble, had a two-handed dunk off a give-and-go and was the stronger finisher in general.