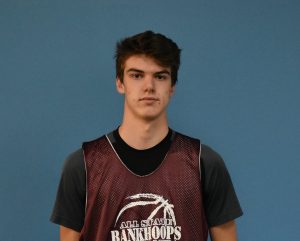 Ortonville Brandon may not be on the map of many college recruiters But with a pair of 2021 prospects with next-level height and some skills as well and based on their performances at the Bank Hoops All-State Camp, it should be for MIAA and WHAC coaches among others to see 6-5 senior Cole Pardon and 6-9 senior Jacob Oswald.

Pardon is a vastly improved player from the camp in the fall of 2019. Few were better in drills, as he tried to make every rep count, was sharp in his footwork, determined in cuts. He’s added strength and filled out his frame, adding to an overall confidence to his game. Pardon has good-looking catch-and-shoot mechanics. What really impresses is his explosion attacking closeouts, and has the creativity of a true guard when he does. Good length, but isn’t maximized when he plays upright.

Oswald is made for the game’s moment — a 3 and D guy. He had to be among the camp’s leaders in both blocked shots and screens set. Good reactions and timing with nimble feet as a rim defender getting out to meet guards and can also stymie with his length one-on-one; needs to be as eager and quick to rotate when it’s just to wall off and grind against bigger players. Did a good job working with guards as a screener, even in the first game when no one knew each others’ games yet, and looked easy shooting the 3. Could also pass, replace, and makes spac. Needs more strength in hands and shoulders to get the tough rebounds and improve as a finisher.

“He had multiple easy, straight-up off a rebound two-hand dunks and quick drop-step finishes in the last game of the day,” a coach said. “Long, long body with a natural instinct to block shots. Big upside here. Has he gains strength and stamina and things start getting really interesting.”