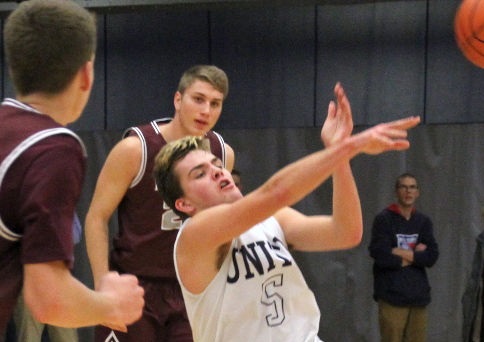 Unity Christian’s Zac Velthouse has had a big sophomore campaign.

While the one that will really count should likely come in the district semifinals, Hudsonsville Unity Christian swept the season series from Holland Christian, 69-64. Unity is a well-coached team that defends and has a wealth of shooters, and enough height on the boards to fend off the Maroons who were without injured 6-8 senior Gabe Overway. Unity Christian is 13-2 and Holland Christian 13-3.

Ethan Alderink  6-6  Jr  Holland Christian: He bested his average hitting 19 points, despite not making a field goal in the first quarter (his first bucket was a tough mid-range turnaround in the middle of the second quarter), then not scoring at all in the third because of foul trouble. Alderink might have scored even more had he not gone to the Euro step again and again without any regard to possible physical advantages and just getting all the way to the cup. Where he separates himself, and why you see there’s been up to MAC recruiting interest, is just how quick and slick his handle is at 6-6.

Chandler Collins  6-4  Sr  Unity Christian: He scored 24 points and was in perpetual motion all night running rim to rim, able to get there and finish even after getting the defensive rebound himself. A long wingspan which he’d unfurl to get clean looks at the front of the rim. That same reach helped Collins thrive in the Crusaders’ pressing zone defenses. Terrific high school forward in the body of a college guard.

Jaxon Halbert  6-5  Jr  Holland Christian: One of the least shy shooters you’ll find. Even if few connected, though one 3 that did in the second half was key to a Holland Christian rally. The one time Halbert put the ball on the floor and attacked a closeout, he had an incredibly long step and got to the hole easily. Intriguing player if he can get some consistency.

Vince Overway  6-4  Sr  Holland Christian: Earlier in the day he signed with Trinity in Chicago, and right from the go in the game showed what kind of player they’re getting. Overway shot the three-pointer with confidence, showed poise as a passer under pressure and the frame and body control to finish inside. Things slowed a bit for him in the second half with increased defensive attention from this next player.

TJ VanKoevering 6-4  Sr  Unity Christian: Just like he did on the football field for three years — a versatile, all-around athlete. Looked like a different breed from the other kids out there at 210 pounds, big through the chest but with long arms. Showed some ups on a goal-tend. Defends, finishes, plays hard. Could certainly play small college hoops if that was his intent.

Zac Velthouse  6-2  So  Unity Christian: He’s in the midst of a terrific sophomore season. He scored 18 the first time they beat the Maroons. While not approaching that kind of scoring production in round two, Velthouse still flashed a lot of potential. He has a varsity body, and surprises defenders with his shiftiness off the dribble. Equally comfortable shooting or driving. Has a knack for being around the ball, and sticky hands when he does.

Noah Wiswary  5-11  Sr  Unity Christian: The more uptempo the Crusaders play the more Wiswary thrives, because he’s slight but highly skilled and perfectly suited for the open floor. The Wiz is really crafty and loves going to his left. He has nice feel and touch around the rim and on the move, gets to the line and has range well beyond the arc.

Oakland ahead of the curve with forward offers
Midland Madness winners