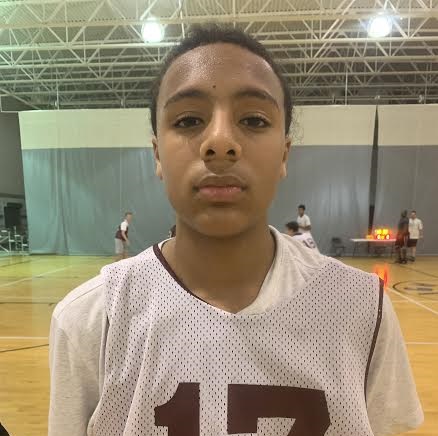 MVP  Durral Brooks  5-11  8th  Grandville: A dangerous point guard in transition, where he played heads up pushing with the pass, and half-court, where he had a one-on-one game to get into the lane. Mature approach to the game was reminiscent of the best 13-year-old point guard to come through the camp, Cassius Winston.

“Can do it all at the guard position and plays with an IQ beyond his years,” a coach said. “He had a workman’s mindset in the drill stations and a competitive spirit that was very visible in the way he played. He can score on all three levels and knows how to get his shot off and has very smooth shot mechanics for a young kid. Passes are crisp and on time. He defends very well on and off the ball. As good as he is and with his ability to control the tempo, the one thing I would like to see is Durral be move vocal.”

Maguire Guinn  6-2  8th  Romeo: “Developing big who showed the ability to face up and drive past defenders from the high post. He used both hands to finish around the hoop. Active rebounder on both ends of the floor. Against stronger players, wasn’t as physical as he’ll need to be moving forward.”

Luke Marlan  5-11  8th  Mason: Shot it well, both in drills and games. A coach’s son, and approached the work and competition with a certain confidence and comfort level.

Daniel Smythe  5-9  8th  Rochester Hills West: “Knocked down shots with consistency in drills and games,” a coach said. “He’ll be a solid player as he does a lot of little things well. Right now his game seems to be geared more for the half-court than up and down.”

Jacob Tuttle  5-10  8th  Lake Orion St. Joseph: “Heady, solid guard with a nice shot from distance,” a coach said. “Competed on defense and made the extra pass when called for.”

Noah Vanlaningham  5-4  8th  Mattawan: The first notes on Vanlaningham are telling: #3, tiny but fearless. Lots of swagger with the ball in his hands. Stood out for his age with things like how tight to body the spin dribble was; his body control.

“If Durral Brooks hadn’t have been just so good, Noah would’ve been my vote for 2024 MVP,” a coach said “Very impressed by his toughness and shot-making ability. Very small, but didn’t play that way. Showed no intimidation when driving and was crafty enough to finish a variety of ways around the hoop on bigger defenders. Guards had a difficult time staying in front of him. Competed on the defensive end but sometimes was just outmuscled.”