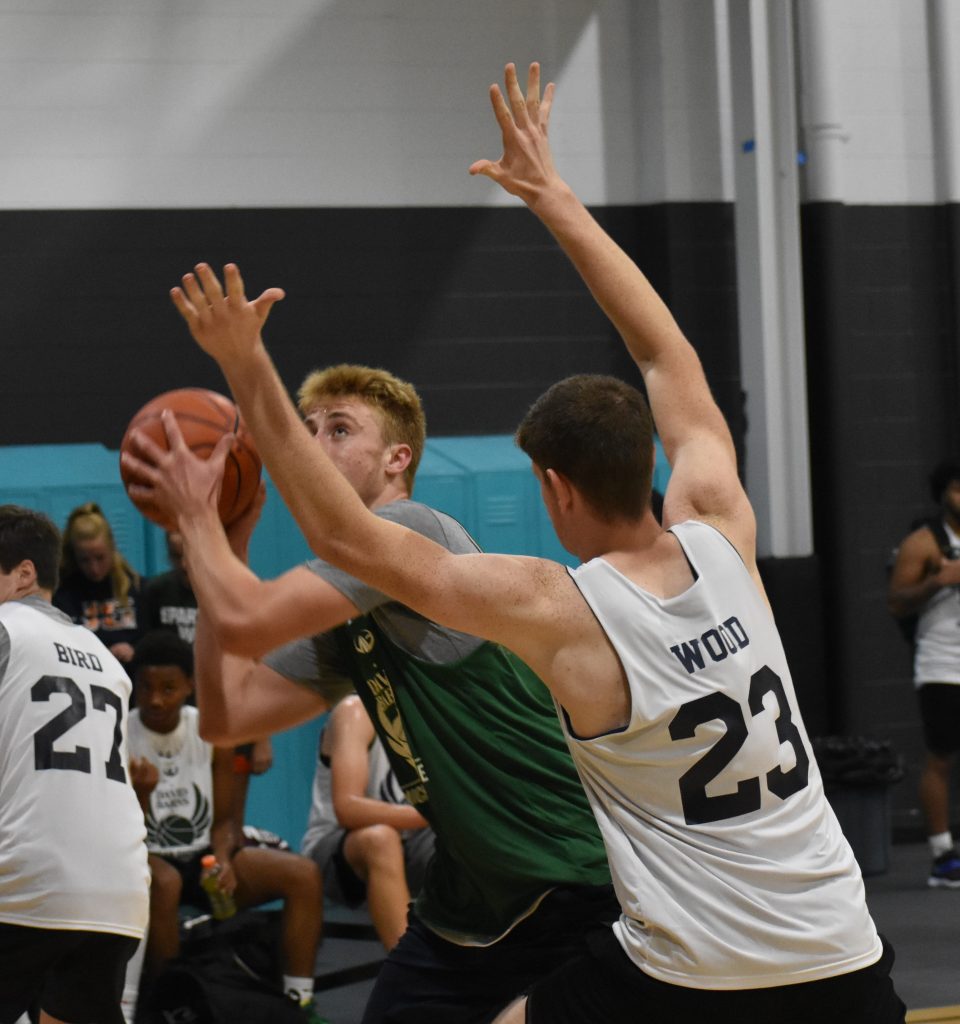 Well-organized and with a field of players who competed hard from the first to last horn, the David Barns Showcase held at Oakland Fieldhouse was a very worthwhile scouting opportunity. While there was a top 10 available senior, 6-2 Bridgeport senior Jaylen Hodges; top 10 2022 6-3 Grand Rapids Northview junior Kyler Vanderjagt; and top 10 2023 Port Huron Northern sophomore Tyler Jamison in attendance, it was also a chance to discover some new upperclassmen and to learn more about the games of others.

Ryan Bremmer  6-2  Sr  Frankenmuth: The Tri-Valley Conference has a number of college prospects in the 2021 class. Bremmer has a deceptively big first step to the hole, then uses his big body to finish at the rim. Would use that same physicality to rebound and get 50/50 balls. Had a body-to-body finish over another TVC’er, Alma’s 6-10 junior Sam Leppien. Needs to cut hard consistently as doesn’t have breakdown one-on-one talent.

Michael Calhoun  6-6  Jr  Riverview Richard: Similar to another Catholic school forward from Downriver, Nick Welch, who went from Monroe St. Mary’s who now plays for Lourdes. Had  nice matchups here with 6-8 Loy-Norrix senior DJ Wood and 6-7 Grand Ledge junior Nick Ellis. Will bang and fight against taller posts on defense, then counter with quickness off the blocks on the other end, using his shoulder to create space and get off shots. Showed good hands and basket awareness in traffic. Good athlete with the motor to rebound horizontally not just vertically. In a year will want to show coaches he can get low and play defense, get loose and dunk with one dribble and consistently knock down the shot — all starting 20 feet from the hoop.

Nate Childers  6-1  Jr  Benzie Central: Saw this kid thrown into the fire a month ago against high-end AAU talent in Indiana, and more than held his own again here. Clearly no stranger to the weight room, his frame resembling at the same age that of Sam Vasiu, who is a freshman at Hillsdale via NorthPointe Christian. Plays with the confidence defensively and on the glass that comes with that kind of physical investment; similarly kept chin to the rim and finished well. Knocked down shots in rhythm while also making the extra pass … which wasn’t always reciprocated. Shot rotation kept the ball on the rim even when he missed. Growth area will be to become a natural playmaking guard and not a drillwork A-B-C guy, to play open, freely, creatively.

Nicolas Ellis  6-7  Jr  Grand Ledge: Doesn’t shy from the hand-to-hand in the lane, then will step out to knock down the elbow shot with confidence. Trustworthy post target when in his sweet spots. Ran hard rim-to-rim defense-to-offense, shot ready. Doesn’t have the quick-twitch athleticism to recover from mistakes in real-time so needs to stay dialed in mentally and maxed out physically.

Grant George  6-1  Jr  Grand Rapids Northview: The talent runs deep at Northview. The least known of their three junior guards at the camp nevertheless had as explosive a run as anyone we saw at the event, with a stretch where George hit 5-of-7 three-pointers and had his teammates going crazy on the bench. Attacked closeouts with a floater. Mixed it up and competed on defense as well. Will need to get bigger, stronger, define his point guard game. 4.0 gpa sweetens the deal.

Michael Justice  6-7  Sr  Troy: Underestimate the Buddy Holly look at your own peril as Justice and his bespectacled brother along the frontline Flushing senior Reed Schilling knocked around opposing forwards all afternoon. Fundamentally sound and consistent, played the leverage and position game on both ends, makes a good target keeping the ball high and finishing efficiently. Not flashy but gives you a solid baseline of production.

Makhi McCombs  6-3  Sr  Flushing: Big, strong, aggressive wing guard who went right at that top-ranked senior in the event, Bridgeport’s Jaylen Hodges. Repeatedly took smaller guards inside to beat them up with second efforts off the board. Hard working on-ball defender who was able to use his body to redirect the ball-handler without getting hand-check calls. Throwback Gus Maker type; liked his energy, confidence and edge. A college program that can develop McCombs as a facilitator could be onto something.