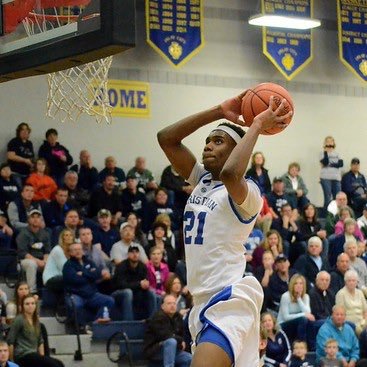 2018 prospect Bryce Washington of the Family via Southfield Christian is one of Michigan’s elite finishers.

Some of the top available college prospects in the state played in the Grand Rapids Storm Classic, included here from the class of 2020 all the way to current seniors.

Christian Agnew  6-1  Sr  Mustangs (Westland John Glenn): One of the state’s top uncommitted senior guards Made key plays in two statement wins for the Mustangs, a comeback elimination of 1Nation then a semifinal blowout of the Family. The Mustangs used four and sometimes five guards against 1Nation, with Agnew exploiting his matchup with forward Shayne Scruggs by ducking under him to get into the lane or shooting before he could close out.

Tevin Ali  6-6  Jr  Elite Nation (Lansing Waverly): Elite Nation may not have a center, but lead the league in 4s — Ali, Mason Pline, Luke Hyde and Josh Perkins. Ali can finish above the rim if you tee him up but is most likely a garbage man on offense. Will step up and block shots on the other end, but got whistled for some cheap ones when we saw Ali against TEAM Basketball.

Terry Armstrong  6-5  So  The Elite (Davison): Everything came a bit tougher for Elite’s offense when Armstrong was either not touching the ball or out of the game. He makes tough free up moves against athletic defenders look easy. Not a ball hog, sees the floor, understands the game. Which makes Armstrong’s shot selection all the more frustrating. A lot of Dion Harris here, from the love of the mid-range shot, to latent athleticism, to court demeanor, and facially. With Jamal Cain matriculating to Marquette, Armstong’s now Michigan’s best combination of natural talent, skill level, and pro size relative to position.

Isaiah Jackson  6-7  Fr  Family 15U (Rochester Lutheran Northwest): Even a team so talented it features over half of Bank Hoops’ top 10 2020 prospects and won the 15U tournament, Jackson stood out. Long, active rim protector. His defense is ahead of his offense — only because he’s already a special defensive presence at this level. He’s not bad at all on the offensive end. Unlike so many young bigs, doesn’t fight the ball and plays right along with the Family’s guards and athletes.

Avery Lewis  6-6  Jr  1Nation (Ann Arbor Huron): Forms a pair of forwards with 6-9 Danny Kolp that might be undersized in the EYBL but will help make 1Nation competitive on the Under Armour circuit. A one-time role player whose increased height, athleticism and assertiveness have increased that status. Kolp didn’t play against the Storm with an ankle injury and Lewis gave away height to their 6-10 Blake Verbeek and 6-8 Brandon Paul. But he took the fight to them with strength, leverage and aggression.  Lewis is an active lefty who gets to balls off either backboard. Has body control and talent as a finisher. GLIAC lock with upside and improvement track for higher.

Drew Lowder  5-11  So  Family 16U (Ann Arbor Pioneer): Playing a true 1, with Rocket Watts being the designated gun in this AAU backcourt. Lowder looked great pushing the break and found the hot hand. Good guard size for age group play, which he uses selectively to assert himself defensively. Seems to like the challenge. In the halfcourt, would like to see Lowder more often turning the corner and getting in the lane to create even better shots for teammates on pitches and dish higheres percentage shots than just moving the ball around the horn. Or finish the play himself, as he looks like a natural scorer around the rim.

Brandon Paul  6-8  Jr  Grand Rapids Storm (Sault Ste. Marie): A lot to like once he transitions from UP to AAU basketball, as he was too flat-footed, reaching for rebounds, and was often the recipient rather than distributor of physical play. Even a point guard like Brandon Wade pushed Paul around a bit. However, hard not to be intrigued how easily he steps out and shoots it; keeps the ball high; sees and gets to offensive rebounds.

Kevin David Rice  6-3  Fr  Family 15U (Goodrich): Easy to see how he was the state’s top freshman scorer this winter. Calls to mind the gifted Flint wings we used to cover like Desmon Farmer,  Jaquan Hart and Cory Hightower. Versatile scorer in the lane or from the baseline where he’s ambidextrous. Seemed tuned in and serious on the defensive end for a ninth-grader.

Danny Sully  6-6  Jr  TEAM Basketball (Troy): He has an uncanny wingspan, and reacts quickly. Those impact defensively both out on the floor harassing ball-handlers, or in the paint where at times it looked like Sully just flicked his wrist and blocked a shot. Dunks easily but still a work in progress on offense.

Bryce Washington  6-4  Jr  Family (Southfield Christian): Made an impressive transition from Class D all-stater to all-around efficient role player who didn’t need a high shot volume to contribute. Used his length and athleticism on the glass, getting to 50/50 balls, defending out on the court. Still has rare ability finishing from the wings, extends on the run so gracefully you forget how fast he’s actually moving.

Romeo Weems  6-6  So  Family 16U (New Haven): Played a lot in the post and that proved a tough cover as Weems ran rim to rim repeatedly and eagerly. That effort is particularly noticeable when juxtaposed with the Family’s other 16U star, Rocket Watts, who sometimes just gets back past midcourt on defense. Their closest thing to a 16U center, Sage Walker, didn’t play, and Weems defended the rim with a variety of shot blocks. He was so dominant it wasn’t uncommon to see Weems not just blocking the shot but recovering the ball himself.