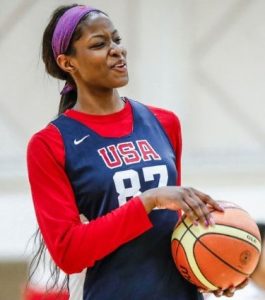 Detroit Edison senior Rickea Jackson isn’t just the top girls player in Michigan, but one of the nation’s best.

Rickea Jackson didn’t play the first quarter. Nor much of the fourth. But in the time she was in there Saturday against Fowlerville, it was easy to see why the 6-3 Detroit Edison senior is considered the top girls player in Michigan. The Mississippi State signee had a stretch of four straight three-pointers in the third quarter as DEPSA put the game away.

Most impressive was how efficiently Jackson scored those 19 points, letting the offense come to her and making 7-of-12 shots, including 5-for-8 from deep. She uses her height and vision to create shots from the top of the key. For such a skilled shooter, Jackson is quite at home on the other end too as part of Edison’s aggressive full-court defense. She can close off a lot of space with her wingspan and guard myriad positions. In half-court defense instead of always hugging her player away from the basket, she might be better served to play the gaps more, which she’ll have to do in the SEC.

Othe standouts for the Pioneers were 5-7 sophomore point guard Damiya Hagmann and 5-10 junior forward Gabrielle Elliott. Hagmann has inherent point guard gifts with her vision, finding teammates — passing them into position, placing the ball where only they can get it. She can drive and pitch, or get into the lane and jump stop and find cutter on the baseline. She was deceptively quick when looking to push and drive herself, the kind of burst she’ll need to play high-major ball at that size.

Elliott is a great athlete, quick off the floor locating and corralling rebounds. She has good hands. But she struggled to finish. She shot it with confidence from 3, though neither of those fell either. Elliott plays really hard-nosed, pressure defense, though she needs to remember to get all the way over with a foot on the sideline when trapping instead of just riding the ball-hander along it.

Fowlerville’s top player was Elie Smith a 6-0 senior who signed with Cleveland State. She’s a strong standstill shooter from three-point range with a high release point. She also mixed it up in the paint, didn’t cower from pressure, and generally had the bearing of a baller going up against a lot of strong talent.

In the nightcap, Hartland defeated Okemos 48-40. A Class A quarterfinalist last March, Hartland won despite missing its star, 6-4 junior Whitney Sollom, who injured her knee in the summer. But you know a team coached by Don Palmer — who between the boys’ and girls’ sideline has won more games than any coach in state history — is going to compete, defend and take care of the ball. Doing the latter were a pair of standouts guards, 5-3 junior Nikki Dompierre and 5-7 freshman Amanda Roach. Dompierre was quick and poised with the ball, able to deliver it with one-handed passes and hit some clutch pull-up mid-range shots. She could change the game’s momentum quickly with “pick six” steals.

Roach played with a confidence beyond her years, including a couple of late three-point shots. She gave a veteran-type look with how she would drag dribble to create contact and draw fouls. When the Okemos defense keyed on Dompierre in the second half, Roach stepped up and made the right plays when the primary ball-handler.

Okemos’ 5-10 senior Laya Hartman is headed to Northwestern and led the Chieftans with 15 points. She was at her best when getting the defensive rebound, using a first-dribble burst to clear herself of the crowd and going end-to-end. In the half-court she was a probing, creative slasher. While Hartman plays low, often it was bending a the waist, instead of at the knees and staying in a consistent athletic, aggressive position.

Okemos has another strong college prospect in 5-11 junior Jasmine Clerkley. To a glass half-full recruiter, she’s a matchup problem; to a glass half-empty recruiter, a tweener. She was strong and aggressive on the offensive glass, an able passer when inverted to the top or wings, and surprised with her skill and a right-to-left mid-range jumper.