King for a Day: Q. Davis is everyman, and superman 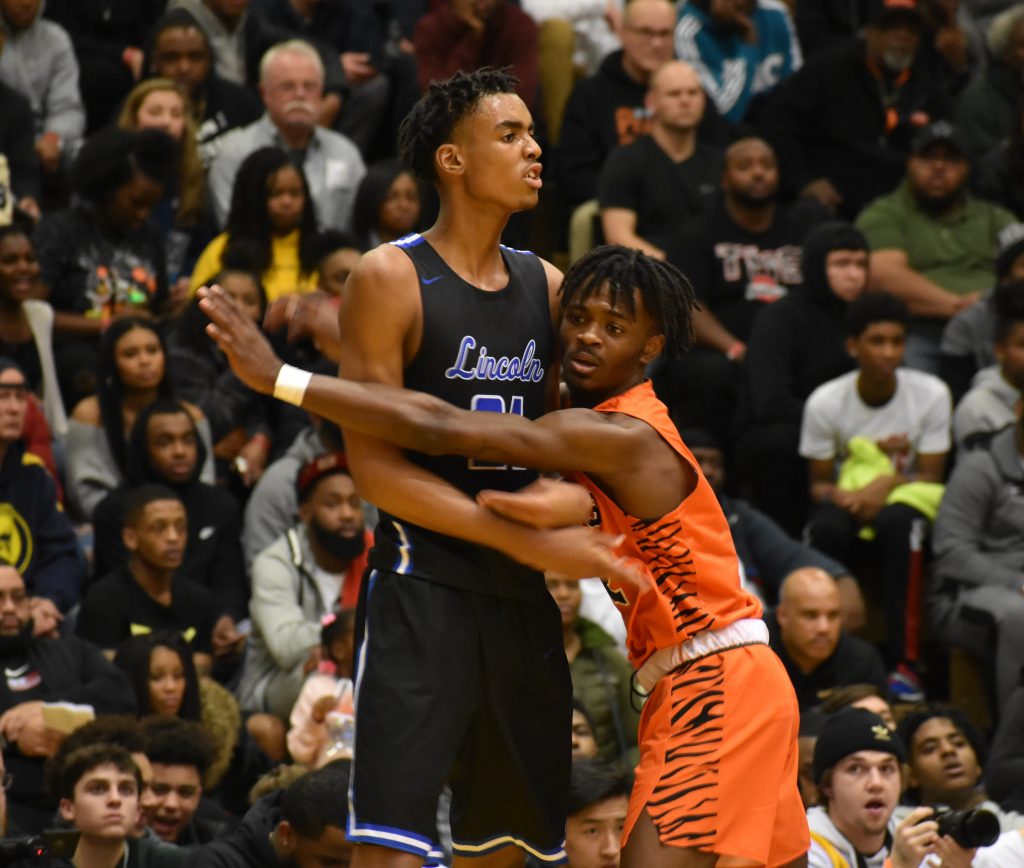 Emoni Bates is defended by Benton Harbor senior Quindarius Davis, who was the MVP in the Tigers’ win over Ypsilanti Lincoln in the Grand Rapids Red Hawks Showcase.

If the Grand Rapids Red Hawks Showcase had super bowl-style prop bets, one could’ve fattened his wallet choosing the MVP for the six-game nightcap, a contest that included the nation’s No. 1 prep player, Ypsilanti Lincoln sophomore Emoni Bates, and a Mr. Basketball favorite going to Butler, Benton Harbor’s Carlos Johnson … and its MVP was Quindarius Davis? The Tigers senior guard is a good player, the past two seasons the guy most likely to be Benton Harbor’s top scorer when it’s not Scobby, known for dunking at under six-feet tall, but not the first name off the tongues of college recruiters or a favored AAU hotshot. Yet he lived out so many high school players’ empty gym fantasies Saturday night in front of thousands. For long stretches Davis checked Bates despite giving up 10 inches, while scoring 16 points himself. But more than those, he was the MVP of the Tigers’ 73-51 walloping win against Lincoln because, playing with pride and toughness, his energy elevated the play of his teammates, all of whom hit shots and competed like they cared on defense. Bates is 6-feet-9-inches, a likely billionaire in the making and preordained face of the game. Davis is the height of the average American male, playing for a school that if the state of Michigan had its way wouldn’t exist and is trying to scratch out most any scholarship offer.

And on this day, Quindarius Davis was king, long live the Tigers.

Between the fans there to see Bates and the Benton Harbor faithful who traveled early to a gym that was sold out by the third game, the gym was loudest for the last game despite the long day. And no louder did the gym at Grand Rapids City aka Creston HS roar than when Davis hit his second-straight 3 in the opening minute of the second half to double up Lincoln. It just got better for Benton Harbor, as Bates’ first field goal after the intermission didn’t come until there were 30 seconds left in the third quarter and this one was already long gone. When defending Bates, Davis face-guarded him, and then tried to get into him and underneath pressuring Bates when he did catch the ball and square up. Davis was pretty good boxing out too. In the fourth quarter Davis stripped Bates, then was able to maneuver under the wingspan of the recovering All-American to convert the layup.

Bates finished with 27 points on 8-of-29 field goals and 9-of-12 free throws. Benton Harbor threw a lot at him, but to Bates’ credit he kept coming back and competing. He made an assortment of high-end moves — tight and explosive for any high school player just all the rarer for his height and age — but finished at a low rate. Bates added nine rebounds, three steals and two assists.

His all-state counterpart, Johnson who was so terrific in beating Lincoln in this event in 2019, wasn’t exactly Devin Booker himself scoring 16 points on 6-of-21 shooting although the 3-of-8 from three-point range looks better in retrospect than in live time. Even without a big scoring night Johnson is valuable because of his presence, the attention he demands, and his ability to produce in other areas like blocking four shots. Unlike Bates, he had his teammates elevate their games and carry the offense on his off shooting night. Johnson’s frontcourt mate 6-6 senior Greg Cooper may have not been the most athletic looking guy compared to his Lincoln counterparts, but he had a knack for being in the right spot at the right time, able to catch and finish; also hit a baseline jumper. Cooper scored 12 points, as did 6-3 senior William Suggs who did it going downhill and also hit a 3. 6-4 senior Joseph Johnson had an and-one and hit a three-pointer on an assist from Johnson.