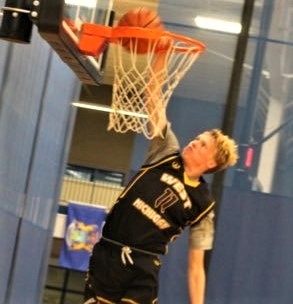 Who says smaller schools have to settle for bigger schools’ recruiting castoffs? For their parts, Ferris State and Aquinas prioritized and connected with some of the very best players in West Michigan, the Bulldogs getting a 2-for-1 special including a 6-11 center with a pair of D1 offers; the Saints pulling in the leading scorer from the biggest league in the Grand Rapids area.

That leading scorer is Tommy Gregwer, a 6-3 power guard from Grandville. His 18 points per game were tops in the O-K Red last year, no mean feat in a conference full of some of the largest schools in Michigan, strong coaching, and defenses geared to stop him. He’s a refined shooter with a consistent, compact stroke, who is big and strong enough to be an all-around, physical scorer who in a best case scenario and calls to mind former Aquinas great Jeff Jayson. Despite that built-from-ground-up shot, don’t get it twisted Gregwer isn’t just a try-hard gym rat, but a gym rat who has also played football and run track for Grandville.

Ferris doubled its recruiting haul from earlier in the summer with commitments from 6-11 Nathan Claerbaut and 6-5 Brandon Claerbaut, brothers from Zeeland East. The taller of the two had D1 offers from Boston U. and Denver. While there will be comparisons to Ferris’ recent All-American center Zach Hankins, that’s about 50 pounds down the road. He’s probably more similar to Jared Stolicker, the All-GLIAC center who preceded Hankins in Big Rapids. Not just tall but skilled and mobile, Nate would be a good basketball player even if he weren’t 6-11. Kind of like Brandon. He’s evolved from a knock-down shooter to, well, still a knock-down shooter — he flirted with 50/40/90 as a junior — also an athletic all-around wing who can guard multiple positions. The Claerbaut Bros. join tiny but talented guards Bennie Crenshaw of Waterford Kettering and Ethan Erickson of Forest Hills Northern in Ferris State’s 2021 class. The Bulldogs continue to thrive on the Westside, as their 2020 class includes Mykel Bingham from Grand Rapids Catholic and Jimmy Scholler from Forest Hills Central.