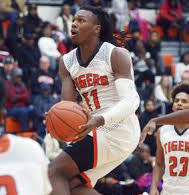 MVP Carlos Johnson  6-6  Jr  Benton Harbor: “Scooby” became a household name as a sophomore when he hit a three-pointer to give Benton Harbor its first state tile in a half century. As a junior he was a dominant two-way forward two earned the two golden college offers for a Michigan high school player, from U-M and MSU. Johnson averaged 26 points and 13 rebounds, including a 38-point performance in a neutral court win over eventual state champion Ypsilanti Lincoln.

Drew Lowder  5-11  Sr  Ann Arbor Pioneer: One of the most entertaining guards in the state, with substance to his game to back it up. Lowder, who signed with Holy Cross, averaged 20 points on 50-percent shooting and 4 assists per game.

Jalen Terry  5-11  Jr  Flint Beecher: As has largely been the case since Mateen Cleaves chose MSU nearly a quarter century a go, the best players in Michigan go to Michigan State. So it is with Terry, the Bank Hoops’ Division 3 MVP and No. 1 ranked 2020 recruit who committed to the Spartans. He averaged 22.5 points, 5.7 assists, 7 rebounds and 3.6 steals per game.