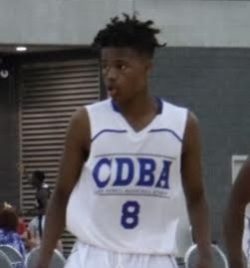 Portage Northern’s Myles Johnson is an emerging junior on Camp Darryl’s 17U.

The July versions of AAU teams often have a different composition from the spring season. Camp Darryl’s 17U team began the live period in Louisville without starting guard Noah Baylis, the Flint Powers senior representing the USA at the Maccabbi Games in Mexico City, while integrating some 2021 player call-ups from the 16U. The most talented of those rising juniors turned out to be Myles Johnson. The 6-4 guard from Portage Northern replaced the patriotic Baylis in CDBA’s starting lineup and for the weekend averaged 11 points, 5 rebounds and 2 steals per game at the Ballin’ Under 1 Roof tournament.

“Myles is a Bishop Robinson clone,” CDBA coach Darryl Matthews said, referencing his former explosive scoring guard who played at Davenport and WMU. “They’re very similar in how they play. Johnson has a better jumpshot at the same age and Robinson was slightly better skilled at getting to the basket. Defensively, Johnson is better because he’s longer and off the glass — and Robinson was a helluva rebounder!”

Matthews said Johnson’s older, new teammates like Trevon Gunter, Darrion Gatson and Landen Moore were encouraging and accepting of him, and he took well to their coaching.

Camp Darryl  next plays at the Brawl for the Ball.

“We’ll be much better the rest of July because of Myles’ play and the return of Noah Baylis,” Matthews said.