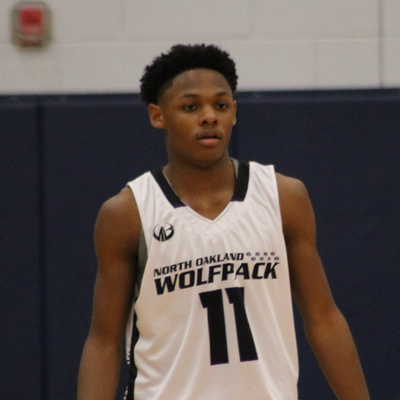 While college coaching eyes were on the 2020 class given the abbreviated spring viewing season, 2021 prospects in Michigan have been establishing who those schools should come see in July with their AAU play. These are some of the 16U prospect who have helped themselves the most this spring.

Jaden Akins  6-3  So  Family (Farmington): Part of the depth that makes 2021 the best guard glass in the state since 2013, creating a recruiting overflow for out-of-state high majors as there will likely be more MSU/U-M caliber guards than there are spaces there. Akins played with two good guards at Farmington which makes him comfortable with all the backcourt talent on the Family’s 16U, able to score efficiently while running point guard without over-dribbling. Pretty left-handed stroke, and blew up with six 3s in an EYBL game in Indianapolis. Has a pull-up game, too, in which he resembles Desmond Farmer. Sound fundamentals on defense and knows how to use his size to envelop smaller guards.

Kobe Bufkin  6-4  So  Family (Grand Rapids Christian): It would be hard for Bufkin to get much higher in our in-state rankings, but nationally he was largely an unknown. That’s changed, as in his EYBL debut he showed what had been brewing on the grassroots circuit with UTS, a combination of skills, length, bounce and versatility of no less than a top 100 national prospect, and top 50 or beyond as he gets bigger and stronger. Slippery and deceptive with the ball to create shots. Contributes as a rebounder and shot-blocker.

Bennie Crenshaw  5-10  So  North Oakland Wolfpack (Waterford Kettering): A screen and roll killer who seems much bigger than he is when coming downhill attacking with the dribble and finishing just as well left- or right-handed. If he can’t get to the cup Crenshaw has as assortment of clever quick shots over taller defenders. High usage without dribbling it to death. Equally good running the fast break or a half-court offense, scores efficiently while getting teammates goods shots. Size may scare off some, but will be playing college ball somewhere.

Connor Dykema  6-7  So  Impact Elite (Grand Rapids South Christian): Gives Impact Elite two interesting 6-7 forward prospects along with Forest Hills Central’s Jacob Ervin. A strong 4 who can be explosive off of two feet, as witnessed with a posterizing dunk at Spiece Run-n-Slam. Grinder, thumper, good teammate who is into winning plays more than numbers but gets those in the process. Works hard on the glass and has a soft touch inside if no go-to move. Similar to style and upside to Zack Nieuwkoop.

Ty Fortney  6-8  So  Downriver Bad Boyz (Taylor Trillium): The Downriver connection reminds me of former River Rouge state champion Charles Kage, or another who ended up at EMU via Marquette, Denby’s James Matthews. He’d be valuable as a garbage man alone with his size and energy on the glass. But he does more, as a consistent finisher above the rim and a capable shooter to 3. Needs to not fall in love with the long ball as it’s a rare skill to be able to rim run and dunk on one transition, then go to the corner and hit a 3 the next. Given the dearth of 4/5s in the 2021 class, could easily see Fortney ending up a top 10 recruit in the class.

Ryan Grantham  6-3  So  Legacy (Grand Rapids Catholic Central): Classic jumpshooter who gets elevation and rim looks quickly and easily. Has a knack for getting it off in limited space. “Not just a jumpshooter,” give him some daylight and he’ll finish with a dunk. Shoots it like a guard, rebounds and finishes like a forward, and covers space with active hands on D. Will have to get a lower, more creative guard game off the dribble.

Harrison Ogochukwu  6-8  So  All-Ohio Red (Orchard Lake St. Mary’s): The light appears to have come on for him, and when the motor is going his physical tools come to the fore. He has some wing wiggle, which allows him to start at the 3 for All-Ohio. Has all the tools to be an elite defender, once he figures out team defense and the effort required. Trending similarly to Gabe Brown.

Aidan Rubio  6-5  So  Program (Goodrich): He played well back in districts for the Martians and hasn’t slowed down. Big-times ups, finishes alley-oops with regularity and can also catch a body in traffic off of other plays. Those same legs make Rubio a weakside shot-blocking threat. Unorthodox release but will hit enough shots to make a defender think twice. Most effectively offensively on the baseline, which is a bit retro.

Ty Wyman  6-5  So  Parallel 45 (Blissfield): Pitches on Saturdays, shoots the lights out on Sundays. He could be a clone of former P45 sniper and current CMU Chip Corey Redman when he’s stroking it from the corners. Long, smooth, natural, as pretty a stroke as you’ll see from a Michigan sophomore. Has the shooter’s mentality that is so valuable as he can end a half with four misses then start the second with four straight 3s. Has a strong rapport with 8th-grade phenom point guard RJ Taylor, who finds Wyman’s sweet spots early and often. Improved defensively. Needs to get lower and more explosive attacking closeouts.